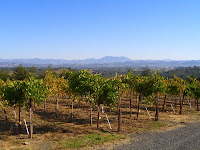 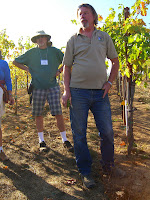 One of the highlights of the WBC was the hike in Saralee’s vineyards in the Russian River Valley. The vines were kissed with gold and the sky was brilliant blue. Local winemaker Rod Berglund was an enthusiastic guide who not only could walk backwards uphill and talk at the same time, but had all the dirt, on, well, the dirt. From the powdery, tan soil beneath our feet, to the earth filled with cobbles (large river rocks) up yonder. I love hearing about geology, a topic I know little about but enjoy, especially as it relates to grape growing.
Our hike was arranged by Zephyr Adventures, a pretty cool outfit that arranges tours in some of the world’s most exciting locales, including Sonoma County as well as Europe and Asia. Speaking to Zephyr founder Allan Wright later at dinner at Sebastiani winery I was interested to hear that, despite the adventurous nature of his tours, he wants to accommodate everyone’s abilities. Our hike, which was slated as the second easiest of four, did include some quite steep inclines in vineyards with names like Rollercoaster! I’d expect Zephyr tours to neither take it completely easy on you physically, but also to be not too much—a pretty good combination, especially for us desk jockeys who need to stretch our legs and expand our horizons once in a while.
The reward for the hike well worth it—a stunning panorama of Sonoma County, with Mount St. Helena rising up, lavender and majestic, in the distance. At the top of the hill, a charming picnic lunch featuring peak-of-ripeness local produce. I fell hard for the fresh figs, which were juicy, lightly sweet, and incredibly delicious. We washed it down with the local wine—never a bad thing in California—including a crisp Joseph Swan Pinot Gris that was a refreshing treat on this warm October afternoon.
Posted by Diane Letulle at 8:12 AM