Starting the New Year with a Nouveau attitude 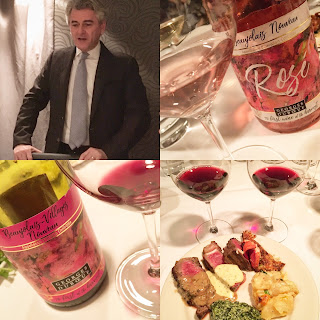 Beaujolais Nouveau had a great vintage in 2018, according to Franck Duboeuf, so it's time to give these wines a taste beyond the Thanksgiving holiday.

Ringing in the new year, make a resolution to broaden your palate with the lighter-style wines of Beaujolais Nouveau.  They are perfect aperitif wines to welcome guests with as they arrive and to enjoy with lighter flavored meals.

I attended a media event with Franck Duboeuf at Morton's Steakhouse. We got to taste through the 2018 Beaujolais Nouveau lineup as well as some more mature Beaujolais from the Cru Villages.

Georges Duboeuf Beaujolais-Village Nouveau 2018 - A more sophisticated rendition of the fresh Nouveau style, this wine had intense aroma and palate of crushed blackberries and raspberries.

Georges Duboeuf Beaujolais Nouveau Rosé 2018 -  Produced from hand-harvested grapes, Franck informed us that this wine was made as a "true rosé," meaning that it is made by brief skin contact on the juice. I found it light bodied with pretty strawberry and raspberry flavors - an engaging wine for the rosé lovers in your crowd.

Pouilly-Fuissé 2016 - From the Macon region, this wine had a fresh citrus aroma and clean, bright flavors of lemon and minerality, with a good finish.

Jean Ernest Descombes Cote du Py 2017 - From 50 year old, south facing vines, this wine had a fresh red fruit nose and rich flavors of ripe bing cherries as well as minerality on the palate.  A delicious wine that shows depth of flavor and a good finish.

Chateau des Capitans Julienas 2017 - Fresh aromas of black cherry and white pepper, the wine offers raspberries and cherries on the palate with a hint of tannin.  This wine is made from grapes grown in the heart of the AOC Cru Julienas region.

So, whether a light-bodied Beaujolais Nouveau or a more structured Cru Beaujolais, the wines of Georges Duboeuf offer a way to bring new flavors to your glass in 2019.

Posted by Diane Letulle at 11:44 PM No comments: 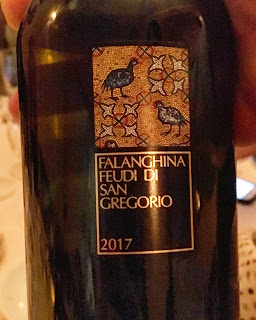 It was the label that first caught my eye. A compact square offering a graceful reproduction of Byzantine mosaic from the Galla Placida mausoleum in Ravenna.  Under that, a second square with the winery's name in an elegant font: Feudi di San Gregorio.

Ancient roots and a modern aesthetic are good representations of Feudi di San Gregorio.  The winery is located in Irpinia near the famous volcano Mount Vesuvius in southern Italy's Campania region. The hilly land of Irpinia has been growing wine grapes since antiquity, and its vineyards were referred to in work by Pliny.

Yet the winery of Feudi di San Gregorio was established less than four decades ago in 1986.  Today the winery has a futuristic look, thanks to its design by Japanese architect Hikaru Mori that was constructed in 2004.  An elegant Michelin-star restaurant, Marenna, completes the package of a contemporary destination for wine and food pairing.  But, despite the modernity of the exterior, the winery honors the old, indigenous grapes of Campania:  Aglianico, Greco di Tufo, Falanghina, and more. 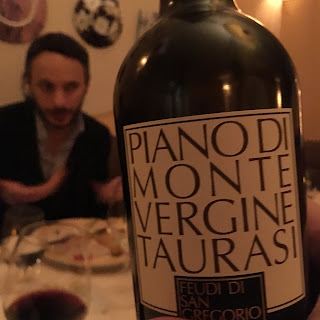 It is this seamless integration of old and new that fascinated me when I had the opportunity to meet Antonio Capaldo, Chairman of Feudi di San Gregorio, when he was last in New York. At a media dinner in Manhattan, I tasted through a number of his current releases:

Feudi di San Gregorio Greco di Tufo DOCG 2017 - Medium gold in color, the wine was a well-structured white with lemon and minerality.  I considered that it would be delightfully food-friendly with many dishes thanks to its high acidity.

Feudi di San Gregorio Falanghina 2017 - Highly aromatic with notes of white flowers, the wine had a rich, round mouthfeel and lush white peaches on the palate. This is a gorgeous white.

Feudi di San Gregorio Taurasi DOCG 2013 - The winery's Taurasi wines are made from 100 percent Aglianico grapes, and they're aged for 18 months in French oak before completing their aging in bottle.  On the nose, I found vanilla and pomegranate. The palate was layered with fresh black plum and blackberry, as well as firm tannins.

Feudi di San Gregorio Piano di Montevergine Taurasi Riserva DOCG 2012 - This is a huge wine that was created from the winery's best hand-selected Aglianico grapes.  On the nose there were violets and herbs.  Tasting revealed blackberries, spicy notes of pepper, savory notes of olive, and a long finish with more blackberries and blueberries.  This is a wine to enjoy now and over years as it evolves.

I saw Antonio shortly after at Robert Parker Wine Advocate's Matter of Taste.  There I had the opportunity to sample a vertical tasting of one of the more interesting wines of Feudi di San Gregorio - its Patrimo line.  The tasting was led by Antonio and the Wine Advocate's Monica Larner.  The Patrimo wines are unique and a slight contradiction - in a winery that focuses on native Campania grapes, these wines are crafted from Merlot.  However, the single-plot Merlot vines are impressively 75 years or older.  They were present when Antonio's family acquired some vineyard areas, and thus are a heritage part of the property.  While the grape variety means these wines are labeled IGT rather than DOCG, they have become flagship wines of the region.

My favorite wines from this vertical included:

Feudi di San Gregorio Patrimo 2009- Deep crimson in color, the wine had an intense black cherry nose that was echoed in a plush palate of juicy, ripe black cherries.

Feudi di San Gregorio Patrimo 2010 - A nose where violets and blackberries intermingled, this was big, complex wine that offered bing cherries, as well as savory notes of balsamic vinegar and rosemary.

Feudi di San Gregorio has made a name for itself as a leader in the Campania region. Their outstanding range of red and white wines are easily available in the U.S., but the most devoted fans may wish to book a flight to Naples to experience the hospitality and gourmet cuisine of the winery in Sorbo Serpico.

Posted by Diane Letulle at 8:08 PM No comments: