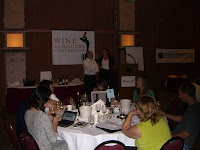 I had an amazing time at the first ever North American Wine Bloggers Conference. The benefits were numerous—both professionally and personally.
I learned so much about what I should and shouldn’t be doing as a blogger to increase readership—and thanks to Alder Yarrow of Vinography--why that maybe doesn’t matter so much because we won’t make enough money to leave our day jobs so we should be doing it for love. Also, props to Tom Wark of Wark Communications and the blog Fermentation for giving us a great top ten list of driving traffic, which included really easy, yet overwhelmingly overlooked, techniques, such as sending an old-fashioned press release to our local paper. This idea crossed my mind in the past, but I never put it into action. Thanks to Tom’s prompting I will. His proactive philosophy also includes asking to be put on top blog’s blogrolls—a more assertive tactic than I’ve used, but perhaps I’ll get some gumption and give it a try.
We learned what to do to make Google like us, and heard different opinions about what it means to be an ethical blogger. Are bad reviews a no-no? Personally, I don’t see why we should be different than any other media with regard to voicing fair but informed opinions. I suppose the onus is on us to make sure we present a balanced view any time we delve into negative territory.
On the money side—there was a wide diversity of opinions here. I found our Friday night keynote Gary Vaynerchuk (JERSEY REPRESENT!) to be boyishly charming as well as charismatic. He exhorted us to go out and make $100,000 on our blogs! As previously noted, Alder and Tom were far more conservative with their assessments of a wine blog’s potential for generating revenue. However, Joel Vincent, our fearless OWC founder, presented the middle ground: starting with a blog and using it to launch a successful consulting business. Snooth founder Philip James showed us a detailed graph of ways to make money and juxtaposed the scale of readership with the complexity of the money-making ventures. Bascially as we get more readers we can make more ad money – o.k., I knew that, but I wasn’t aware of the really piddling CPM rate that Google ads pay, only $1 per thousand hits—yeesh, I’ll leave my blog uncluttered right now. However, Philip echoed Joel’s sentiments by discussing how we can parlay our blogs into other consulting-type ventures as well.
Even the most widely-read bloggers are only making the monetary equivalent of a really poorly paying part-time job strictly from their blogs—which begs the question, “Why do we do it?” Why do we blog and why do we shell out airfare, hotel, and conference expenses (admittedly these were quite low) to attend a bloggers conference? First of all, there is a passion among us which is palpable. Secondly, this feels like we are on the verge of something that is going to be big. I don’t know where my blogging will lead me. All I know is that it’s someplace I want to go. And at the Wine Blogger’s Conference in beautiful Sonoma County, CA, I was surrounded by 160 other people who, I’d venture to guess, feel exactly the same.
Posted by Diane Letulle at 3:27 PM