Foie gras, goat brie, shrimp cocktail, celery with onion dip, and a Tillamook cheddar are on the table. Later there will be pigs in a blanket, mozzarella sticks, and loads of other hors d'oeuvres. You never know what may end up being served at holiday cocktail parties. And you might think that no wine could work really well with all of these. But Prosecco is light in body and has a good amount of acid - it pretty much washes down fatty foods with aplomb as well as not overwhelming light fare such as shrimp. It is like a chameleon of wines, seeming to be as right with buttery foie gras as crudités. The Zonin is a nicely balanced choice and with only 11 percent alcohol, it can be consumed easily over the course of the evening. The wine is a great value, too, available for $12 or less locally. 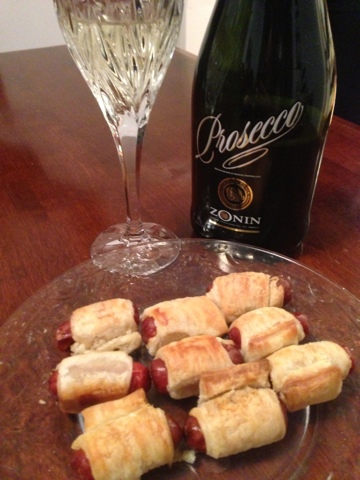 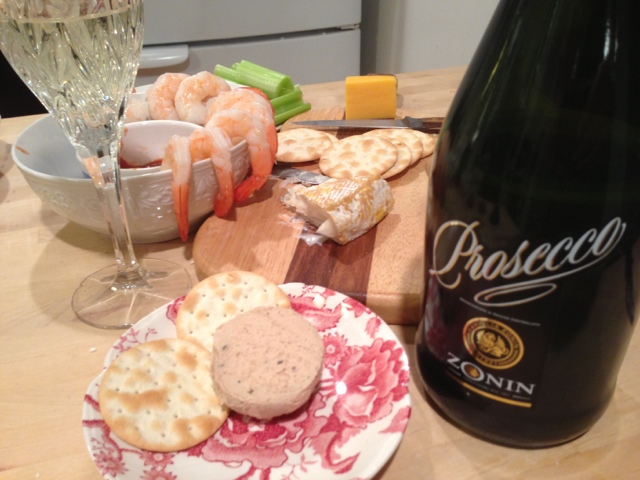 Posted by Diane Letulle at 9:48 PM No comments:

The Shake Shack in Madison Square Park is known for long lines and great beef.  But tonight, I discovered a new way to enjoy what many say is Manhattan's best burger.

It all happened when, two drinks into the evening, my new friend said, "Hey do you want to go to Shake Shack?"

We had been having one of those typical Manhattan first dates: chic location, overpriced alcohol, and an unusually good conversation that ranged from Baroque embellishments to waiters who rush you through your bottle of wine.  It was fun, but somewhat de rigueur - until the Shake Shack suggestion came.  This would be a game changer.

The thing is, I make a point of not eating on first dates.  I can't take in the meal anyway when I am soaking in all the physical details of a new person.  But - Shake Shack. Now that was allowed. Not only allowed - encouraged.

It happens to be that before tonight, I had never eaten there.  That's my foodie confession.  I hadn't intentionally avoided it. On warm summer evenings when there was a live band playing in the park, it beckoned to me - hard.  But there was always the line to contend with, and I never wanted to go there.

However, tonight the line was less than ten deep.  It gave me just enough time to peruse the half bottles of wine in the window. And I was frankly shocked.  Clos du Val? And Ridge?  There were no prices listed, but I thought the Ridge sounded fantastic.  A big California red to soak up all the delicious burger grease?  Thank you very much.

And, so, this is how a casual jaunt for what should have been a $20 meal became a $50 plus event.  The little bottle of 2008 Ridge, which was a Bordeaux style blend full of ripe black fruit and firm tannins, was a whopping $32.  Pretty pricey for a "restaurant" that had dysfunctional outdoor heaters and folding chairs where mice scampered in the 50 degree breeze.

This was one of those truly memorable meals.  My first Shake Shack burger.  Those crisp wavy potato strips fried to not-quite-greasy perfection. The frisson of first date conversation. And the magnificent Ridge, which shone through the fading lights of the park and warmed me up body and soul.  It was a stellar dining experience after all.

Posted by Diane Letulle at 11:20 PM No comments:

I know somebody (you probably do, too) who always tells me, "I only like red wines." I always reply, "You need to taste more white wines."  And this skeptic's mind was changed last night by Martin Codax Albarino.

For Americans who drank one too many taste-alike, heavily-oaked Chardonnays, the crisp, zippy, fruity Albarino wine can be a real surprise.

Now, I believe there's a time and place for many wines, and, food, of course, makes all the difference.  While I could drink refreshing, lemony, sunny Albarino all by itself, or as us wine geeks like to say "as an Aperitif", it's absolutely delicious with fresh seafood, simply prepared.

One of the most wonderful pairings I had was at a recent lunch at Costanera in Montclair, New Jersey. My dining partner and I began our meal with their delicious mixto ceviche, which included fluke, shrimp, octopus, and squid.  The vinegar of the dish and the high acid wine were a refreshing pairing.

The Martin Codax Albarino is laughably affordable and widely available.  I recently poured it at a $15 and Below class at the South Orange Maplewood Adult School, and it was the hit of the evening.

Albarino is a native grape to Rias Baixas, which is in the region of Galicia, Spain, far in the northerwestern corner of the country.  Try it with seafood or by itself when you want a crisp, refreshing white that your friends who only drink reds may just love. 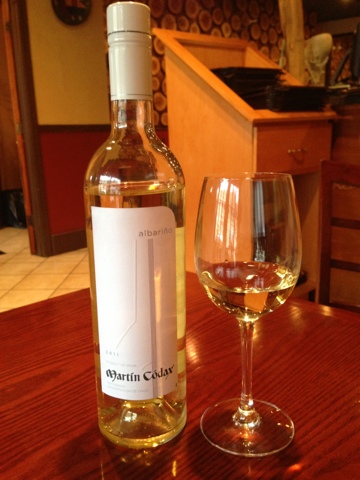 Posted by Diane Letulle at 7:22 PM No comments: