Sunny Italy in a Glass

Ah, bellinis! This light-hearted concoction, named for a 15th century Venetian painter Giovanni Bellini, was created in 1948 by Giuseppe Cipriani at the world famous Harry’s Bar in Venice (Hemingway hung out there and it still attracts a celebrity clientele).
The recipe is dead easy: Prosecco, a sparkling Italian white wine, and peach puree.
I indulged in a bottomless flute of bellinis recently at Arte Café, a sprawling Italian restaurant on the upper west side. The standard brunch entrees of French toast, omelettes, and eggs benedict were very good, but it was the drink special that got our attention. For $12, you could enjoy all the mimosas, bellinis, champagne (I’m sure they mean sparkling wine) or bloody marys you cared to drink! Our attentive waiter never let our glasses empty.
In bellinis the voluptuous sweetness of peaches is cut by the tang of wine, and the fizz just adds to the fun. My blushing orange cocktail glowed in its simple flute. Gazing at the warm hue, I imagined myself lounging around a loggia on Lake Como as George Clooney sailed by. My bellini seemed filled with Italian sunshine, making it the perfect antidote to a gray February day.
Posted by Diane Letulle at 8:43 AM No comments:

My Palate or Yours?

Been dining in high end and casual places recently, and got the waiters’ wine opinions in both. On Friday night at the upscale Highlawn Pavilion, I ordered the Rodney Strong Chalk Hill Chardonnay. The waitress, a lovely woman—do actresses wait tables in Jersey, too?—declared it her favorite wine. But as we talked, it became clear that she was thinking about Chalk Hill, the winery, not Chalk Hill, the Sonoma appellation. I liked the waitress, but I started to wonder about waiters offering opinions about wine.
Next night I was in New Brunswick, home to my alma mater Rutgers University. I dined with fellow alums at a local fave: Old Man Rafferty’s. This hang-out has been going strong for decades. It was more of a sandwich place at first, but my college pals always loved it because it stocks seriously good desserts. Over the years the space and the menu expanded and now the entrees, especially the specials, get pretty fancy.
My girlfriends assigned me the task of wine selection. Since we were ordering a variety of mains, from crabcakes to filet mignon, I honed in on the Pinots. I ordered the Laboure Roi Les Sangliers Pinot Noir Reserve 2006. The waiter, who seemed young enough to still hang around the frat house, excitedly told me, “I think you should order the Castle Rock. It’s great and it’s the same price.” I paused, taking this in. I asked him, “Why is it great?” He replied, still enthusiastic, “It just is.” I smiled and told him I’d love to try it another time, but tonight I wanted the French. He was crestfallen and mumbled something about “All the bartenders agree with me.”
In truth, I had never tried either wine. But I had been to France a couple times this year and felt pretty safe ordering the Laboure Roi. Later at home, I googled the Castle Rock, and based on limited online reviews, it did seem interesting, so maybe I will pick up a bottle to compare.
There were a few ideas that hit me after these dinners. Number one is obvious: everyone has a different palate. Maybe our youthful waiter likes a lot of oak in wine or maybe he hates oak. I have the feeling he couldn’t tell me one way or another, because, like most of the world, he doesn’t know when he’s tasting oak in wine. Lacking a wine vocabulary, most people are reduced to adjectives like “good,” which tell you everything about their judgment and nothing about the wine’s taste. So, listen up wait staff. If you can give me real information about a wine--“This Chardonnay was aged in stainless steel,” or "this Shiraz has huge tannins"-- then I’d love to hear what you’ve got to say. If you're just going to give me your opinion, then forgive me for ordering the wine I want instead of the wine you like.
Posted by Diane Letulle at 12:58 PM 3 comments: 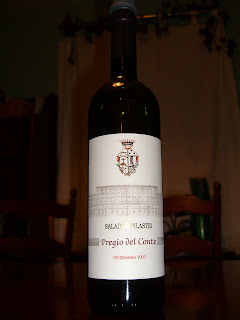 The Wine That Changed My Life

Last night I attended a meeting of the Association for Women in Communications. During the cocktail reception I talked about my passion for wine. Sitting next to me was a vivacious brunette who reminisced about the first time she tasted a really fine wine. She didn’t remember what she drank, but she said that glass completely changed the way she thought about wine. I told her I had the same experience.
The first time I tasted a wine that shattered all my expectations I was sitting in the antiques-laden livingroom of my inlaw’s Montclair home. My father-in-law, who always struck me as having walked off the set of a Fred Astaire film, entered the room carrying a bottle of Chateauneuf du Pape. I don’t know the vintage or the producer—didn’t pay much attention to that back then. The wine was presented to me and my husband as being something very special. I sipped the dark wine and let it sit in my mouth, where the liveliest things began to happen. I was awe-struck by the dimensions of flavor I was tasting. First fruit. Then leather, then something earthy, was there a smokiness there? There was so much going on in my mouth I was awestruck. And that was it. The genie was out of the bottle. I knew. I knew what I had been missing, what all the fuss was about, why certain wines command hundreds or even thousands of dollars. My ideas and expectations for wine were never the same.
Posted by Diane Letulle at 11:42 AM No comments: