Getting Wild with Chardonnay at Roanoke Vineyards

Roanoke Vineyards on the North Fork of Long Island has a Chardonnay called The Wild! that provides flavor, satisfaction, and a little bit of funk.  I recently tasted the 2010 vintage of The Wild!, which goes far beyond the typical flavor profile of new world Chard, which, to my palate, tastes fruity but often comes up short.  The Wild! has a nose of limes and peaches. When I drank it, I immediately responded to the its full body, and I loved the complex flavors, which were tart and somewhat citric but also had hints of grass and a satisfying, long finish that was reminiscent of mushroom.  This really is a wild child Chardonnay!
The name is a nod to the use of wild yeast in the fermentation. Now, playing with wild yeast can be a bit of a crap shoot for a wine maker.  To give a small bit of scientific background, yeast is the living organism found naturally on grapes that eats the sugar in the grape juice and produces alcohol - that's the fermentation process. In modern winemaking, it's common for winemakers to kill the natural yeast and instead start fermentation with purchased yeast. That's because, in addition to causing fermentation, yeast also produces compounds that contribute to the wine's flavors.  With purchased yeast,  they know what flavors the yeast will bring to the wine.  With mother nature, you don't know how it will turn out.  Using purchased yeast can produce a consistently palatable wine.  However, that consistency can be a little bit predictable, a lit bit bland.
While problems with using wild yeast exist - fermentation may stop before it's done, off-flavors can develop - many winemakers recognize that it can provide layers of complexity to the wine, and that was certainly the result here.
I like the label of The Wild!, which features energetic swaths of colors and also the use of the explanation point in the name of the wine. This winemaking technique is exciting, and the results are too.  I've said before that it takes a special Chardonnay to win me over, and this is one of the rare ones that does.

Posted by Diane Letulle at 1:05 PM No comments:

When the wine being poured is just so so, it's nice to reach for a specialty cocktail. Last night the whites at the New York Travel Massive, a monthly gathering of travel industry and blogger types, were showing their age. And, just like Grandma's wedding dress, we're sure they were lovely back in the day. But now, just like old satin, these were yellow and no longer fresh. For example, a 2008 Albarino should not be poured for anyone you like.
On the upside, the bartender Peter was mixing up refreshing cocktails, Choya Cherry Blossoms. Choya is a brand of Japanese Plum Brandy, and, at 14.5 alcohol, it's not nearly as potent as grape based brandy. However, the drink had plenty of kick from Tanqueray gin, a summer mixer if ever there was one. The result is a slightly sweet, slightly sour, fizzy treat. Here's the full recipe: 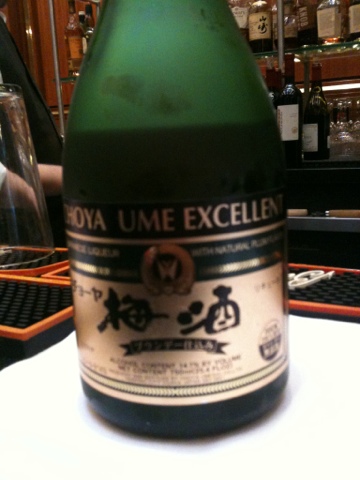 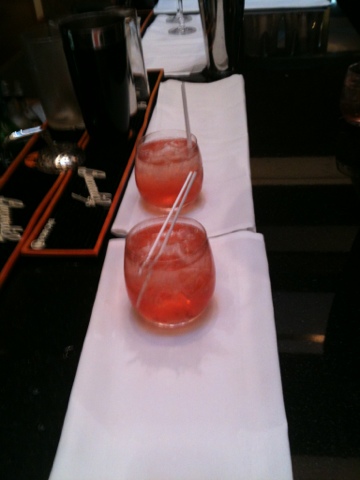 Posted by Diane Letulle at 9:00 AM No comments: 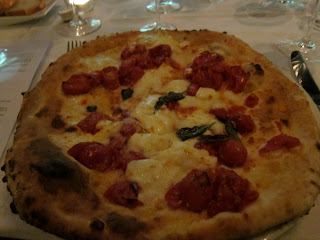 Visitors to Naples may also want to try a cooking class at the always tasteful Citta del Gusto.
Posted by Diane Letulle at 8:02 AM No comments: 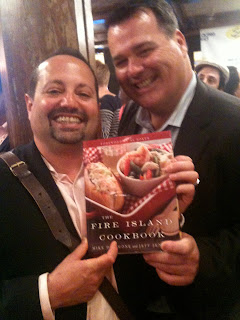 I met Mike DeSimone and Jeff Jennson years ago at Kevin Zraly’s Windows on the World wine class, when I was a neophyte wine lover and they were guest speakers. I always knew the duo as the World Wine Guys, so I was surprised to run into them in Manhattan fresh off of a day promoting their Fire Island Cookbook.  Because man cannot live by wine alone, it turns out they are also very handy in the kitchen.  I’ve always found the pair to have a wonderful breezy attitude and an appreciation for the good life – and it all comes through in this new book.

If you’re not from around these parts, you should know that Fire Island is a very special shore destination beloved by harried Manhattanites.  The lovely strip of beach is a true getaway: no cars are allowed and it’s only accessible by boat. It’s one of New Yorkers’ favorite summer rituals to board the ferry on Friday afternoon.  By the time the crossing is finished, stress has eased away and smart phones aren’t used for work anymore, just texting friends to meet at the nearest bar.  Yet while the island is relaxing, its residents have casual chic down to an art form, and this comes across in the beautiful photography of the summer fresh fare in the book.

Each chapter has a full dinner party menu, from appetizers to mains to desserts and--since the two are experts in the vinous pleasures of life--wine pairings. The menu themes reflect their love of travel: Mediterranean Odyssey, Villa in Tuscany, Portside in Puerto Vallarta.  With recipes like Gazpacho, Greek Yogurt with homemade Fig Compote, Bistecca Alla Fiorentina, Herbs de Provence Grilled Lambchops -these are like four star vacations in a meal.  The recipes make sense for the rhythm of beach life, with many being light and easy to prepare, and others – I love this – being elaborate preparations for those days when sun and fun are rained out.

With Memorial Day Weekend less than seven days away, I’m ready for summer, sand, and taking a spin in the kitchen with the Fire Island Cookbook.

Posted by Diane Letulle at 2:24 PM No comments:

Pizza, protests, and the Pope - One Day in Rome

I arrived in Fiumincino Airport this morning with no set itinerary, no lodging, and only a vague idea of what I wanted to see. However, I pride myself on being a nimble traveler and knew there was so much to see and do in the Eternal City that I couldn't go wrong.
I immediately ran into a fellow wine blogger, Robbin, and plans quickly were hatched. She had a bed booked at The Beehive, a happily located hostel a mere three blocks from Termini Station. For 40 Euros I had a cheerful private room with fresh modern styling punched up by neon orange accent pieces.
Seeing Rome with little time and less energy due to jet lag is a challenge that was easily solved by the 110 bus, a red double decker with an open air top that followed the route of the major historic sites.
Before boarding, we were treated to a spectacle of a loud parade of protestors waving red flags that was led by a tractor trailer blasting, as Robin said, Italy's most famous rapper. They were calling on Italy's new prime minister to fix the mess left by Berlusconi. After ten minutes, the parade passed and we mounted the 110.
As a bright January sun warmed me in the fresh air, I was entranced by thousands of years of history passing by: the Coliseum, with the audio guide reminding us of the captives being eaten by "wild animals;" Circus Maximus, where the Romans held their beloved horse races; and palaces, fountains, and piazzas too numerous to mention.
But it was St. Peter's Square where we disembarked. I reasoned that it was a place unique in all the world and most deserved my time. The line to enter the basilica was depressingly long, so we took a detour to lunch at a stand up Pizzeria a few blocks away. Robin told me that after the dough is made it rests for three days, giving the thick crust large pockets of air that make it light. We ordered slivers of three types of pizza: a tomato sauce pie with small slices of tomato on top - I had never tasted such sweet tomato sauce, a pie with a mashed broccoli and soft cheese, and a pie of soft roast potato slices and cheese. All were wonderful, but the tomato pie won my heart.
Returning to St. Peter's Square, the line had miraculously shrunk and after our bags and coats went through X-ray scans, we were in. I had visited Rome many years ago and was eager to see La Pieta, Michaelangelo's moving sculpture of Mary seated mourning her deceased son, who lies across her lap. The gentle humanity of the scene of a mother in mourning always moved me. Of course the grandeur of St. Peter's is so great that only the most jaded could fail to be impressed. I paid the 7 euros to enter the small museum inside the church where assorted Popes' gold embroidered vestments and an enormous jewel encrusted miter caught my eye.
The day ended at a small enoteca, drinking Langhe wine and chatting with new friends. In the end, I was incredibly grateful to return to this magnificent city, if only for a day. 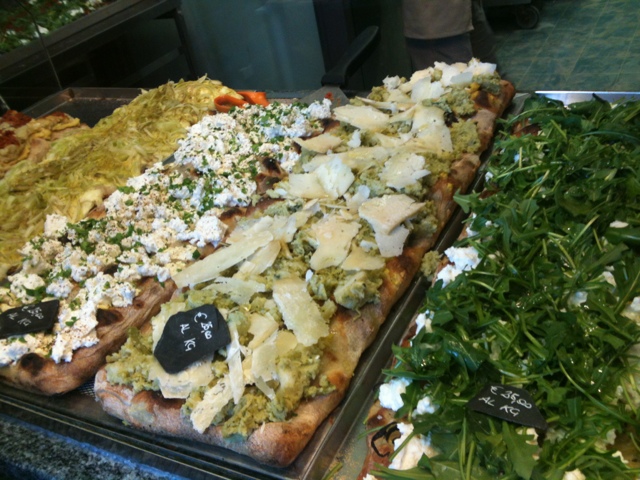 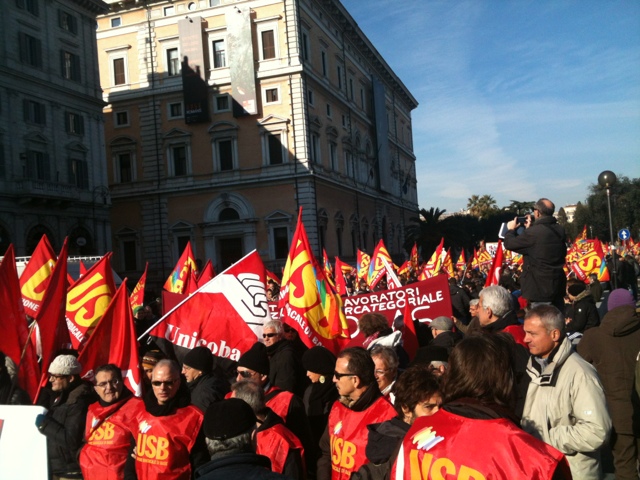 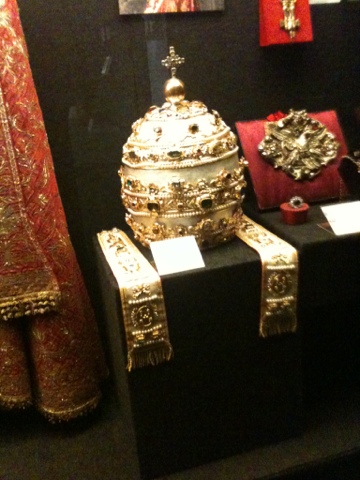 Posted by Diane Letulle at 11:52 AM No comments: