One Night in France 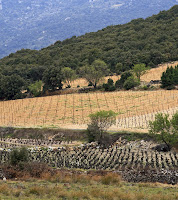 Last night I taught French Wine: An Evening of Tasting & Discovery for the South Orange-Maplewood Adult School. 24 wine lovers came to drink, eat & learn about the pleasures of French wine.
Our host was Papillon 25, where chef Yanick Ramieri whipped up chicken dumplings, fried calamari, and spicy skewered chicken to accompany the drinks. Our night began with a modestly-priced ($28) Champagne from the house of Duval-Leroy . This light-flavored Champagne was satisfying, but, to me didn’t compare to some of the more expensive ones, including Moёt Chandon or Veuve Clicquot. One piece of trivia I learned recently: it’s good to dry your champagne glasses with a cotton bar towel. The reason? The bubble trains that shoot up from the glass are formed around tiny pieces of lint. This is one time when it doesn’t pay to have pristine glasses. Sure enough, our flutes were just out of the dishwasher and the bubbles were a little disappointing.
We next moved on to Sancerre Delaporte Loire Valley 2006 Chavignol. This was a softer version of the classic Sauvignon Blanc with citrus on the nose and less acid than usual. Reactions were mixed to this pour. Another trivia: the town of Chavignol, where this wine is made, is also the namesake of spectacular Loire goat cheese that’s comes in thick discs. Chavignol cheese is a fantastic pairing with Sancerre.
We moved southwest to explore Bordeaux next. Papillon had supplied us with their house Bordeaux, which was Baron de Rothschild Lafite Reserve Special 2007, a jammy wine, deep garnet, that was 70% Merlot, 30% Cabernet. This wine was palatable but quite simple and young: I showed my class the shine on the wine’s surface which indicated its youth. I would have wished to serve something older and more complex: maybe next time.
We moved east across the country to end my lecture in Burgundy. From this region, we enjoyed the hit of the night: Domaine A.F. Gros Hautes Cotes de Nuits 2002. Earthy on the nose and palate, but balanced with rich fruit that’s mellowed nicely with age, this wine was a steal at $20 from the Wine Library.
By this time, the group had grown quite convivial. I turned off my powerpoint and poured our last wine, a bonus, Fleur Des Pins Graves 2006, made of Semillon 70%, Sauvignon Blanc 30%. With aromas of marmalade and an appealing golden-orange hue, this was a sweet and delicious way to end a wonderful evening. As my happy students left, they thanked me and asked when the next class would be. We’ll see. For now, I’m pleased that my first foray into the world of conducting wine classes—with wine--went so well.
Posted by Diane Letulle at 2:56 PM