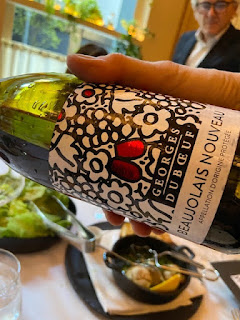 Can you drink Beaujolais Nouveau after Thanksgiving time when it's released? Mais oui!

Most sources suggest you can enjoy Beaujolais Nouveau wines from six to 12 months after their bottling, which means that when you want to reach for a refreshing light red this winter, you can still enjoy your Beaujolais Nouveau!

The idea of promoting the new wine of the Beaujolais harvest came from his father, Georges, and has grown into a phenomenon that is celebrated world wide on the third Thursday of November. This year, the wines were fresh and flavorful.

And, even though many regard the young wine as being a Thanksgiving staple, there's no reason not to have some bottles on hand for the months after their release. Stock is still available, and there's no denying the appeal of the red fruit palate and light body.

The line of Beaujolais Nouveau wines are mostly light-bodied reds, but for the past couple years Dubouef has also released a delightful rose, which Franck admitted is "not an easy wine to produce." 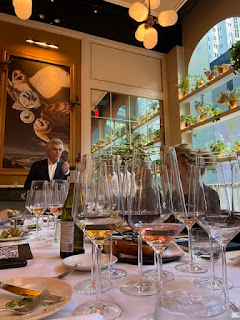 The 2022 Beaujolais vintage saw the hottest summer ever recorded in France, with long dry stretches as well as strong storms. Harvest began August 17th, a month earlier than in 2021, with perfectly ripe grapes. This year's wines are full of tart cherry, cranberry, and the hint of herbs like thyme anchored by good acidity.

Just as drinking sparkling wine is a great change of pace from the heavier reds we normally pour in winter, so too can drinking Beaujolais Nouveau provide your palate with a fresh, flavorful departure from the big winter reds in many glasses.

Posted by Diane Letulle at 9:42 PM