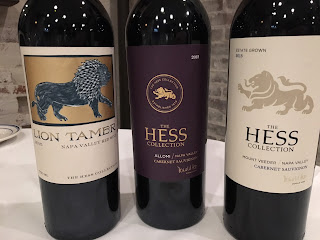 The Hess Family Winery was established during the late 1970s when Swiss bottled-water entrepreneur Donald Hess visited Napa Valley in search of spring water -- but fell in love with wine instead. He changed his life focus, befriended Robert Mondavi, and was among the first Napa winery owners seeking to source grapes from Mount Veeder. Five generations later, Donald has retired but his family succeeds him in running the business.

Nicole Carter, Hess Family Wine Estates Director of Winemaking and Chief Marketing Officer was in New York City this week to show some of the wines from the Hess Collection series and talk about exciting news in the winery.

She started by explaining that, by planning the winery’s succession while Donald is still alive, the family is well-situated for a successful transition.  She explained that now millennials are at the helm of a 40-year-old business, which provides interesting opportunities to connect with the wine drinkers of tomorrow.  Another big change is Nicole’s own recent promotion to Director of Winemaking, Nicole is leading the enterprise in the development of new luxury wines – in other words, they are not aiming to develop more of the under $20 offerings. So Nicole is looking to elevate the offerings of the winery.

And, speaking of elevation, in addition to vineyards on Mount Veeder, the Hess family has historically planted high (harkening to Donald’s Swiss background.)  Donald was determined to plant the highest vineyard in the world and today his 10,000 foot high vineyard in the Andes, named Altura Maxima, is in the Guinness Book of World Records.

The wines we tried at the recent tasting included current Napa offerings: 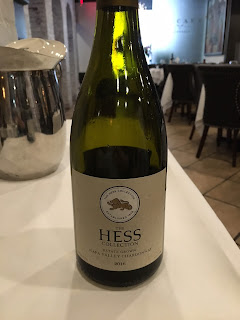 Hess Collection Estate Grown Chardonnay 2016 – Nicole said she thinks a Napa Valley Chardonnay requires a certain texture and this wine eschews the all-stainless approach that some winemakers have to deliver a definitely Californian Chardonnay – but with restraint. Grown in a cool pocket of Napa near the bay, the wine had refreshing acidity and flavors of crisp apples with a hint of butter. Oak was present but not pervasive, and careful aging included putting only 19% of wine in new French oak.  $22

-       Hess Collection Lion Tamer, Red Blend 2015 – The labeling on this project is distinct, with the family crest symbol of the lion taking on a beautiful, Byzantine feel.  Inside the bottle is a surprising blend that includes 50% Malbec, 23% Zinfandel, and five other traditional Bordeaux blend grapes. The result is a big wine with a sweet cherry/blackberry fruit profile and a kick of black pepper.  Great with the ribeye we enjoyed at the Tuscany Steakhouse. $45

-       Hess Collection Napa Valley “Allomi” Cabernet Sauvignon 2015 – A single vineyard comprised of six different Cabernet clones growing in the hills of northeastern Napa. This rich Cab had a pretty nose of roses, cherries, and leather. On the palate there was black cherry, black currants and black pepper. The wine offered nice acidity and a long finish.

-       Hess Collection Mount Veeder Cabernet Sauvignon 2013 – While many Napa Cabs need a good deal of aging for tannins to settle down, this wine isn’t one. In another innovative blending twist, Nicole explains, “Malbec tames tannin.” The addition of 18% Malbec brings a quality of lushness to the often angular Napa Cab structure.  This wine had a blackberry nose and intense blackberry flavors on the plate.  It was a round, somewhat plush red, rich and full, but without the harshness of a full-on young Cab. Highly recommend. $65 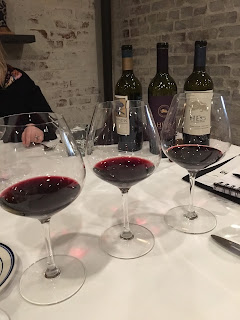 For consumers looking for moderately priced Napa wines at a luxury taste level, look no further than the Hess Collection.

Posted by Diane Letulle at 7:13 PM