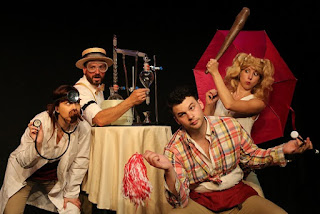 Anthony and his merry band sang, mugged, served, and cheerfully presented about 10,000 years of booze history in a breezy hour and a half.  For those who appreciate theater, barbershop quartet music, and the chance to think (a little) as they drink, The Imbible makes a great evening out.
Posted by Diane Letulle at 12:06 AM