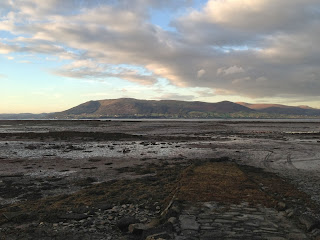 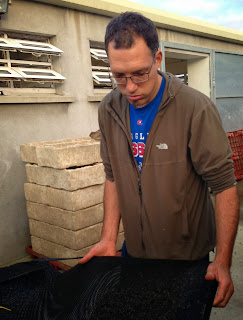 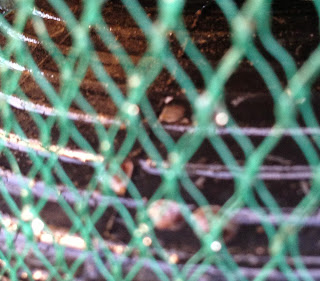 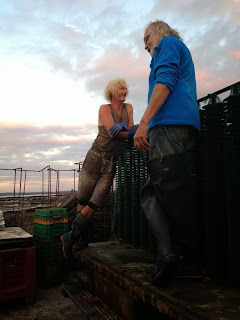 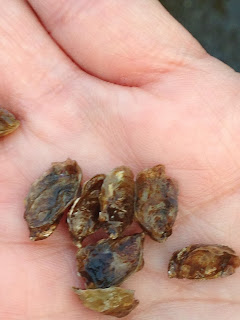 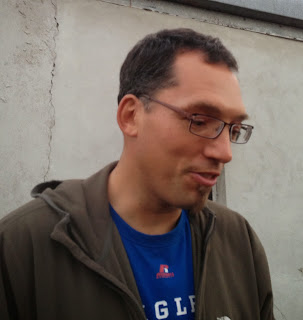 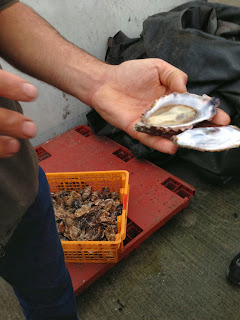 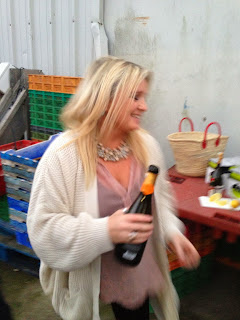 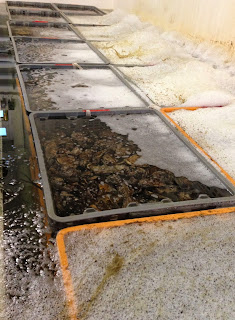 Everyone knows that the shorter the distance food travels, the fresher it is when you take a bite. My visit to Carlingford Oyster Farm gave me a rare treat of dining on oysters just pulled from salt water.

The visit was arranged by Failte Ireland for a dozen bloggers who had been in the country for TBEX. As we gazed out on an inlet at low tide, the water dark on the slick gray sandbanks, we were welcomed by the farm's co-director, Kian Louet-Feisser.  The oyster farm is in northeast Ireland in the compact village of Carlingford, which boasts an 800 year old Norman castle, some very cute pubs, and a lovely Georgian inn and restaurant, the Ghan house.  Kian - a tall, affable man with zero pretension - explained that they purchase young Pacific oysters (faster growing and more disease-resistant than Atlantic ones) from a hatchery in Normandy, France. The French merchant was there on the day of our visit. "Go on, ask him something," Kian encouraged our group of mostly North Americans. "He's got a lovely accent," completely unaware of how charming we found his brogue.  Kian scooped a handful of baby oysters out of a flat black mesh bag and passed them around. At four months, they were slightly smaller than dimes.  The farm was started by Kian's father, who, now in his 70s, has begun a new project of raising oysters from 20 day old larvae.  They are so small at that stage that a million fit into a tablespoon. We saw them at one month - specks as small as a newborn's fingernail- resting on black rubber disks.  Kian waved a long arm at his dad, who was standing on the back of a flatbed truck, "Keeps him out of trouble." The patriarch laughed, his wildly curling gray hair a testament to a life lived in the winds of the coast.

These bivalves grow at different rates- it takes between 2-5 years for them to mature- so the same age oysters will range in size.  Therefore, much of the work at the farm involves "grading" the oysters - sizing them with a mechanical sieve. Those large enough are stored on land in saltwater tanks, the rest go back in the inlet. Kian explained, "It takes a year to grade all the oysters we have. It's like painting one of those large American bridges - by the time you're finished you have to start again." When they reach the weight of 80-100 grams, they're ready for market. He then led us to the cement building where mature oysters were resting in tanks of flowing salt water.  Kian pulled out a shallow plastic bin with lumpy shells that held the promise of an early evening snack.


We followed him to the gravel outside and huddled closely to watch him demonstrate proper opening technique - moving the knife gently back and forth until the hinge clicked open and then wiggling the blade up the side of the shell. Then he cut the meat away from the underside and began handing them out.  We took the shells eagerly in hand, upending them to slurp the oysters, salt water running off our chins and fingers. Around that time, Kian's wife Mary strode forth, her light blond hair stirring in the breeze as she set a picnic basket of Prosecco on quickly-created table of crates.  She passed out glasses of Italian sparkling wine, the bubbles delightfully washing down the salt water-washed flesh of generously sized oysters.

The darkening sky signaled it was time for our visit to end.  We toasted to the generosity of Kian and Mary and to the pleasure of farm to finger dining on the shores of Carlingford, Ireland.
Posted by Diane Letulle at 11:47 PM