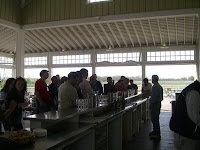 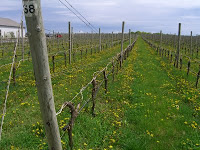 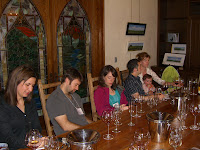 If I were a scout, I’d be sewing a patch embroidered with a glass of red wine and a map of Long Island on my green-sleeved uniform today. Because at TasteCamp, I had earned bragging rights to knowing more than a little about wines from both the North and South Forks.
TasteCamp East was organized by the energetic Lenn Thomson. He matched up 30 bloggers with more than a dozen Long Island wine producers and the result was a glorious weekend of discovery.

Friday
Our entrée to Long Island wine began Friday evening in the grand tasting room at Raphael Winery, where members of the Merlot Alliance poured their wines. Merlot is Long Island’s signature grape. In many bottlings of Long Island Merlot, winemakers feel free to stir in Cabernet Franc, Cabernet Sauvignon, or Petit Verdot. The Aussie-born Pellegrini winemaker took us through a flight of Merlot that began in 1993. I was impressed that the older wines stood up and offered a nice amount of fruit and color despite being 16 years old. Favorite wines from that evening included the 2004 Clovis Point Merlot blended with Cabernet Franc and the 1998 and 2000 Wölffer Merlots.
After enjoying passed appetizers and a good share of wine tasting, we settled at formally set tables complete with candelabras. Dinner was ever-so-good after a dreary day driving out to the edge of Long Island. The foie gras and poached pear appetizer and short rib ravioli in particular were stunners.

Saturday
Saturday morning started early as we corralled into a back room at Roanoke. The set-up was professional: spit buckets, water bottles, and information sheets about the wine. We sat at long tables and went to work on our tasting, learning that they like their wines unfined and unfiltered—an approach we would see again out here. Our next stop was Paumanok, where the smiling welcome of Charles Massood eased our way into their terrific line-up, including a super crisp Chenin Blanc and their elegant Assemblage, a Bordeaux-type blend of Cabernet Sauvignon, Merlot and Petit Verdot. I was thrilled that his son, winemaker Kareem, took us into the cellar for 2007 barrel samples that left our tongues bright purple.
Our lunch was at Shinn Estate. We eagerly attacked a buffet of duck breast, mushroom salad, penne and asparagus, green salad, and calamari. The lunch wine that was my favorite of the weekend was the barrel sample of the 2007 Shinn Cabernet Franc. Long Island Cabernet Franc was a revelation to me. I had tasted quite a few Cab Francs on my trip to the Loire Valley last summer. In France, this wine can be pale in the glass and in the nose it often takes on vegetal components. Here, it is a riper, meatier red--darker in color and more intensely flavored. Then again, I’m told that 2007 is an exceptional vintage.
Lunch was followed by lengthy chats by North Fork winemakers who conveyed their passion for farming sustainably, despite the challenges of their maritime climate. Before entering the winery, I had admired the sunny dandelions and brilliant green ground covers that grew between the vines, which had just gone through bud break (every blogger took the same close-up photo). Barbara Shinn explained that they intentionally created a meadow to bring in good bugs and assist their vineyard’s ability to thrive organically. This attractive and incredibly down-to-earth winemaker said the funniest line of the weekend: “They say that good wine is made in the vineyard, but good wine comes from a horse’s ass.” These words to live by were uttered as the group passed around a flower pot of aged manure that’s used as fertilizer—I kid you not.
The after-lunch tasting in the garage of Shinn was overwhelming—too many wines in too little time. We had all slowed down by that point, tired by the food and the pace of the day. (I never did get that double espresso I needed!) It was more of a social time for us to catch up with old friends and get to know new ones better. As Finger Lakes publicist Melissa Dobson and I exchanged girly hugs, it occurred to me that I was enjoying the company of my fellow bloggers as much as the wine. These are vibrant, funny folks who share my passion, and I was delighted to spend the weekend with them.
On the huge porch at Bedell, we shivered in a cool spring breeze as we ran through their line up, which included some yummy but expensive selections, including an oaked Chardonnay which I might have bought if it had been $30 instead of $48. After our tasting, we soaked up thin rays of sunshine and admired the flat, wide vineyard behind the open-air deck. Some of our party dropped off, but the boldest ones soldiered on to a final tasting at Lenz—and I’m so glad I did. The winemaker was a character: bearded, hippy-like and precise in his opinions. Maturity ebbed away as we laughed at each other spitting into a grate in his drive, giving each other points for distance and style. We drank frothy barrel samples poured from a plastic pitcher and were pressed to guess the variety—the white pinot noir stumped all but the most astute.

Sunday
Sunday morning, our numbers had dwindled further, and my group got a bit lost as we ambled over two ferries and across lovely Shelter Island. When we reached the regal Wölffer Estates, we found our companions in a beautiful tasting room, its high ceilings crossed by thick wooden beams, a beautiful iron chandelier hanging over a grand dining room table. Our red wines were served in bell-shaped Reidel glasses. We swirled our Merlot and watched it spin, like Flamenco dancers careening in long skirts. Roman Roth, the German-born winemaker, grinned as he discussed 2006, a challenging year that still produced a wonderful fruity wine. We ended that tasting with a golden dessert wine from grapes that had been attacked by Botrytis—a very good thing! This is the same noble rot that creates exquisitely sweet and complex Sauternes in France. It seemed sinful to pour the rest of our glasses down the spittoons—but we had one more winery before we were done.
Our weekend finished at Channing Daughters. Their fast-talking winemaker Christopher Tracy was lively, fun, down-to-earth, knowledgeable—I can’t say enough about how I enjoyed his hospitality. Luckily, his wines reflected his boundless enthusiasm. In terms of winemaking, he took a distinctly different view than other Long Islanders, looking to grape varieties from Northeast Italy and the Adriatic-influenced Veneto rather than Bordeaux. One sip of his Tokai Friulano and we were convinced that he was right. As we petted his fuzzy, brown Labroodle and enjoyed the sound of rain pinging on the porch roof above, we felt a comfortable pleasantness steal over us. We had learned so much, tasted to exhaustion, taken pages of notes, and sent out dozens of tweets. At last, we could relax. On the porch at Channing Daughters, drinking fine wines on a rainy Sunday afternoon, we knew how pleasant a trip to Long Island wine country could truly be and we enjoyed the moment….not as bloggers, but simply as lovers of the good life.
Posted by Diane Letulle at 8:36 PM