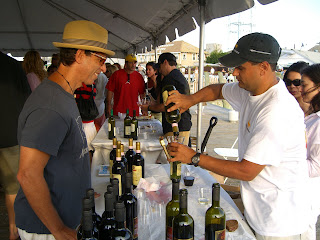 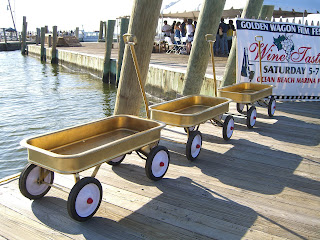 If you happen to be on Fire Island over the summer, look out for this event on the Ocean Beach Marina. For the past two years, the tasting has raised money to support the annual Golden Wagon Film Festival.
While the event previously featured only Long Island wines, this time half were Italian. I enjoyed two refreshing proseccos and a full-bodied Montepulciano, among less successful offerings. The Long Island wineries featured were Borghese, Paumanok, and Pindar. The Paumanok stood out. They had a good, light-bodied Chardonnay, as well as a rich and earthy 2004 Cabernet Sauvignon--the best wine of the tasting.
In addition to wine, there was an assortment of interesting cheeses, including brie, St. Andre, goat cheese, layered cheddars and more. Live guitar music was a nice touch.
While I think the event should include more Long Island wine and the pourers should have information about what they’re offering, the event is a nice departure from the usual weekend activities at the shore. The two hour tasting drew a large, amiable crowd of casual imbibers and wine lovers.
As my friend and I sat on the marina, we savored the Paumonok cab and some pungent cheese as we watched the ferry sail by. It was a lovely evening all around.
Posted by Diane Letulle at 8:44 AM