Discovering the magic of Valais with Dr. José Vouillamoz 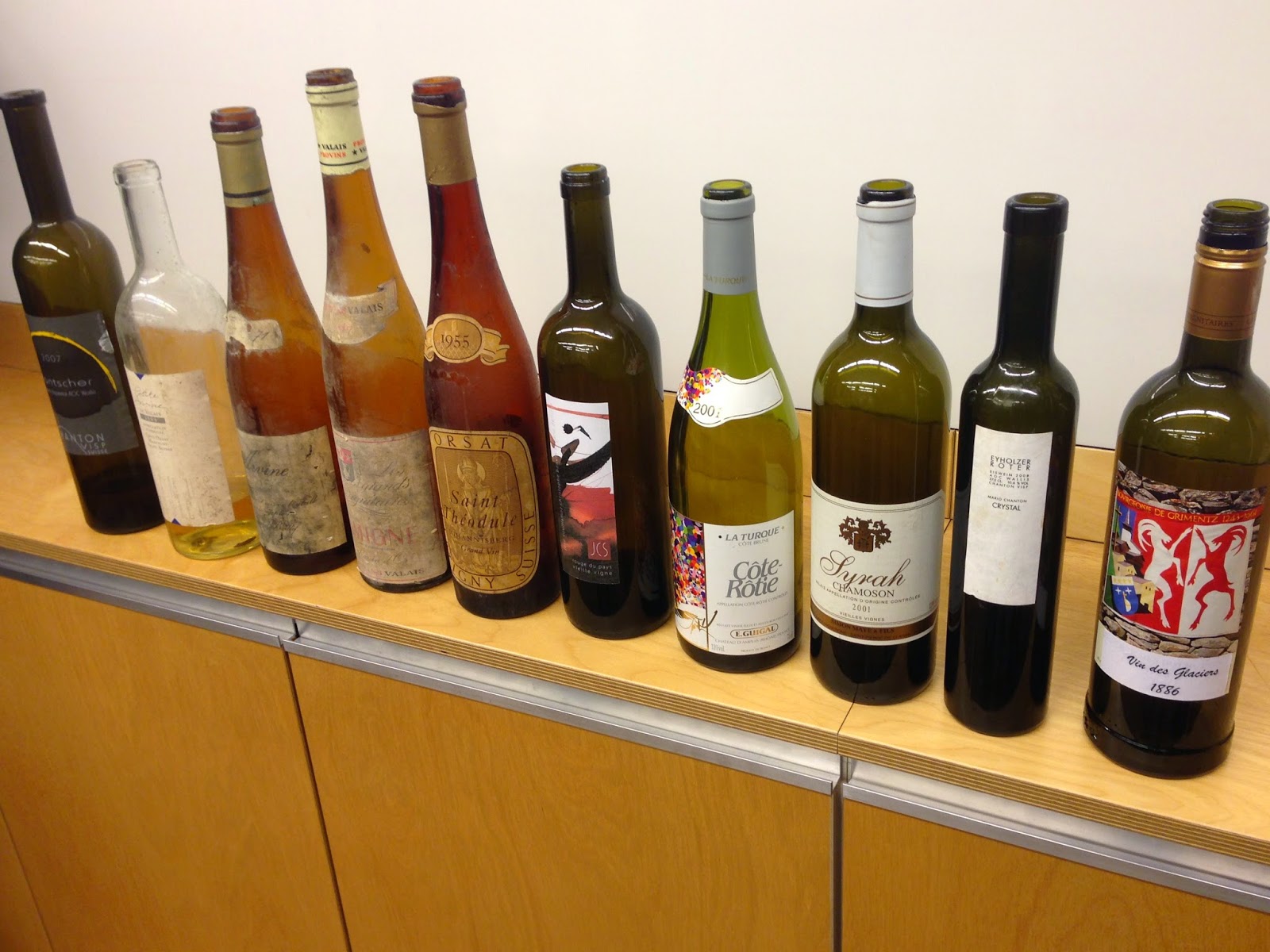 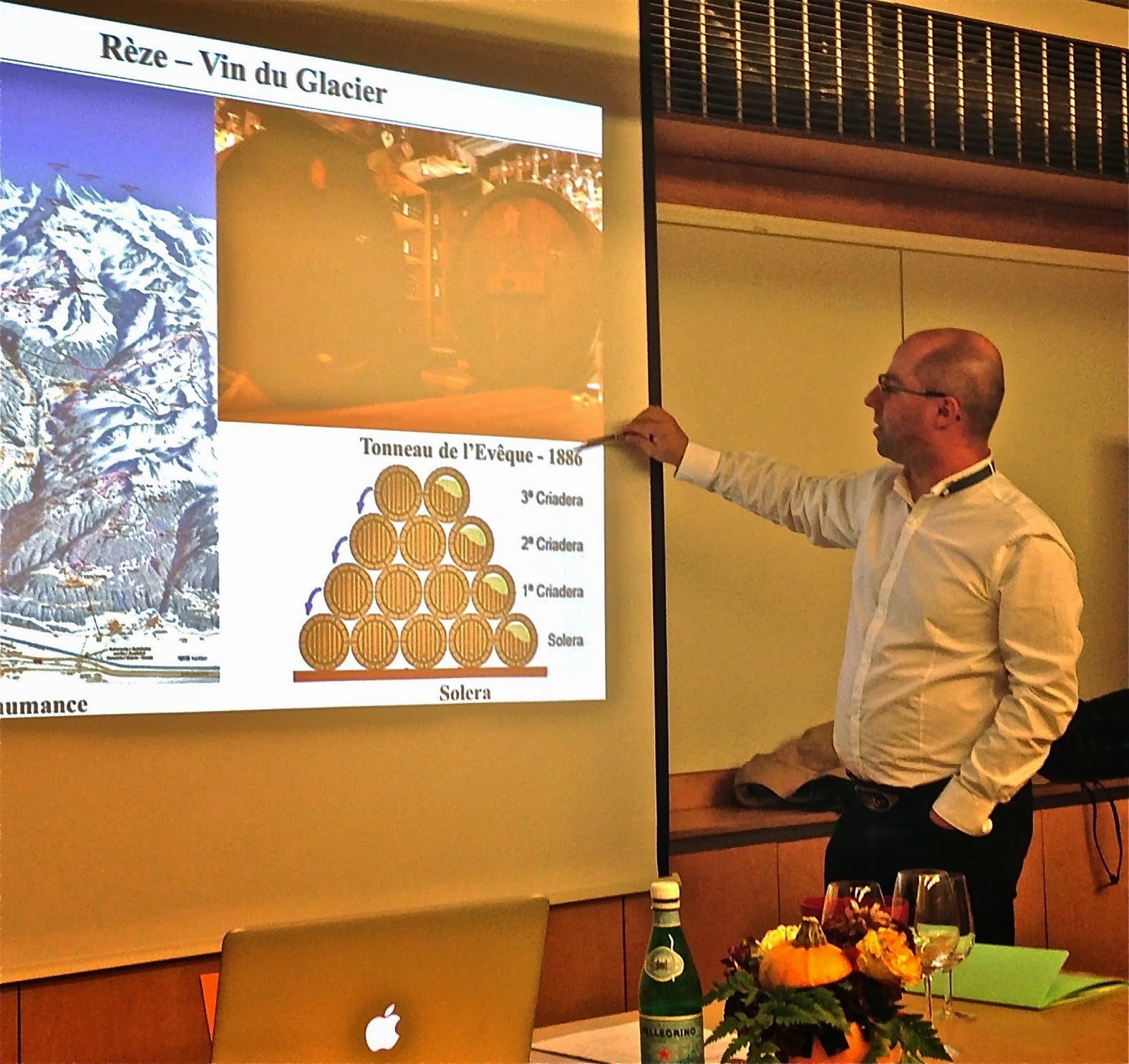 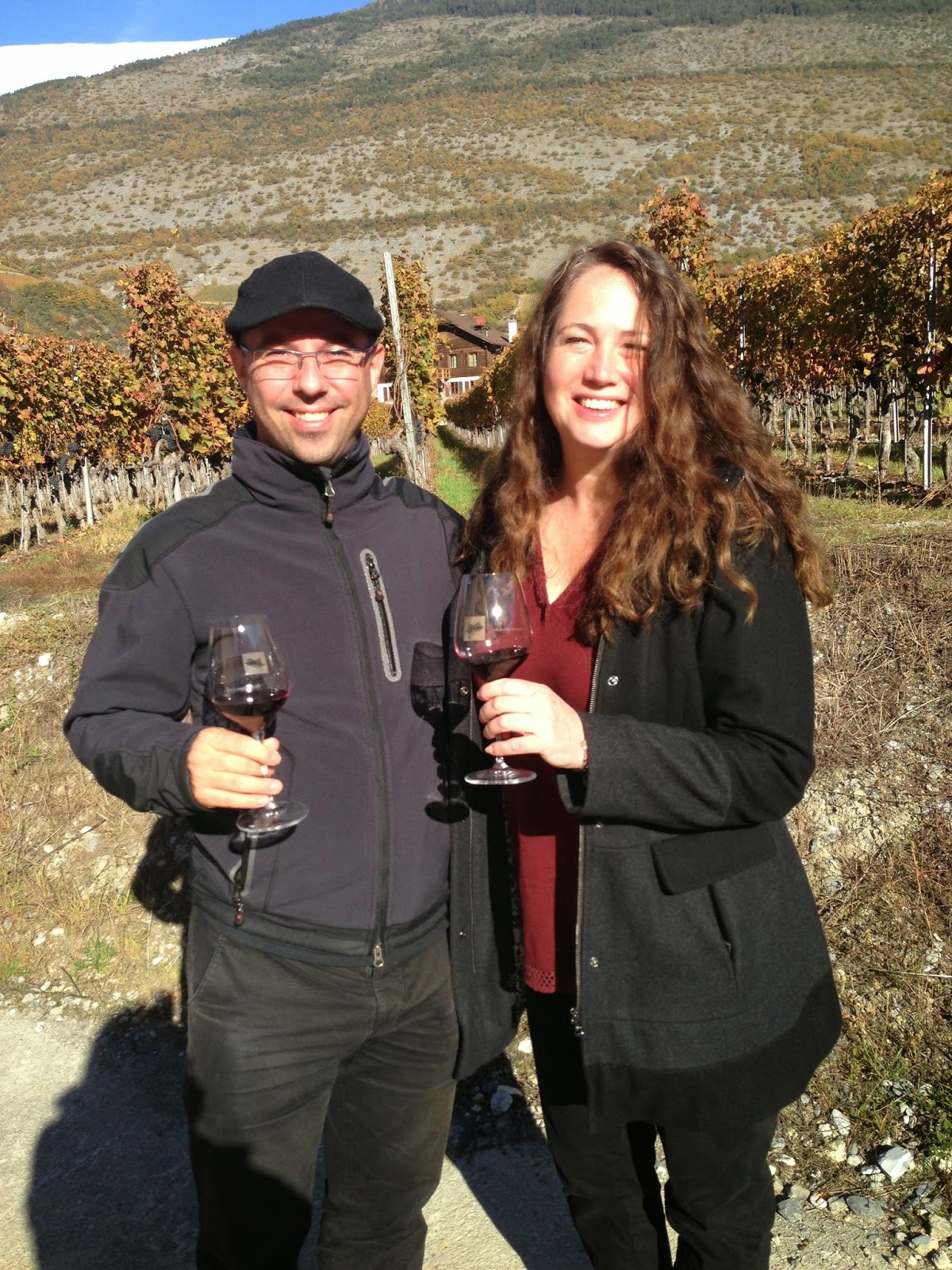 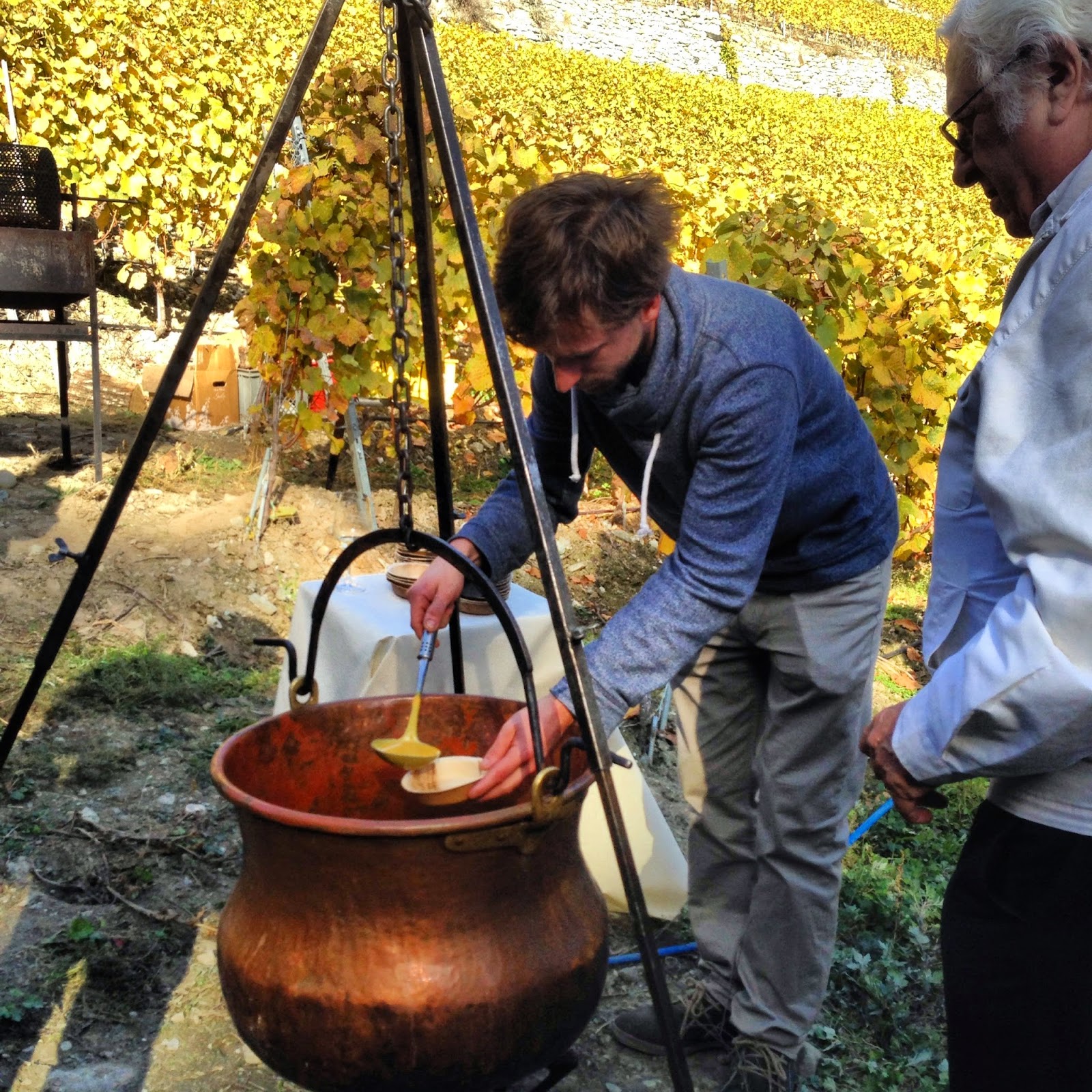 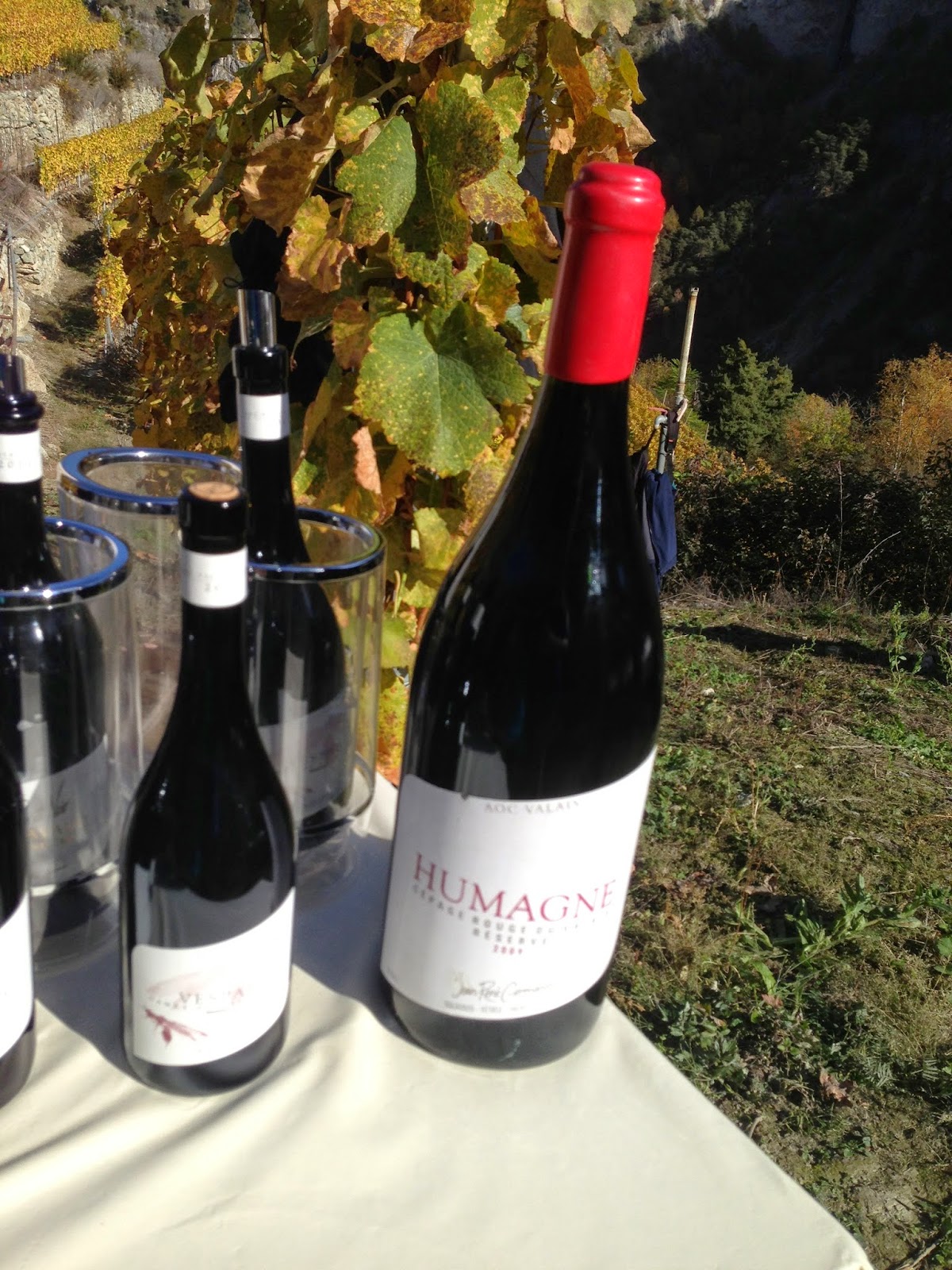 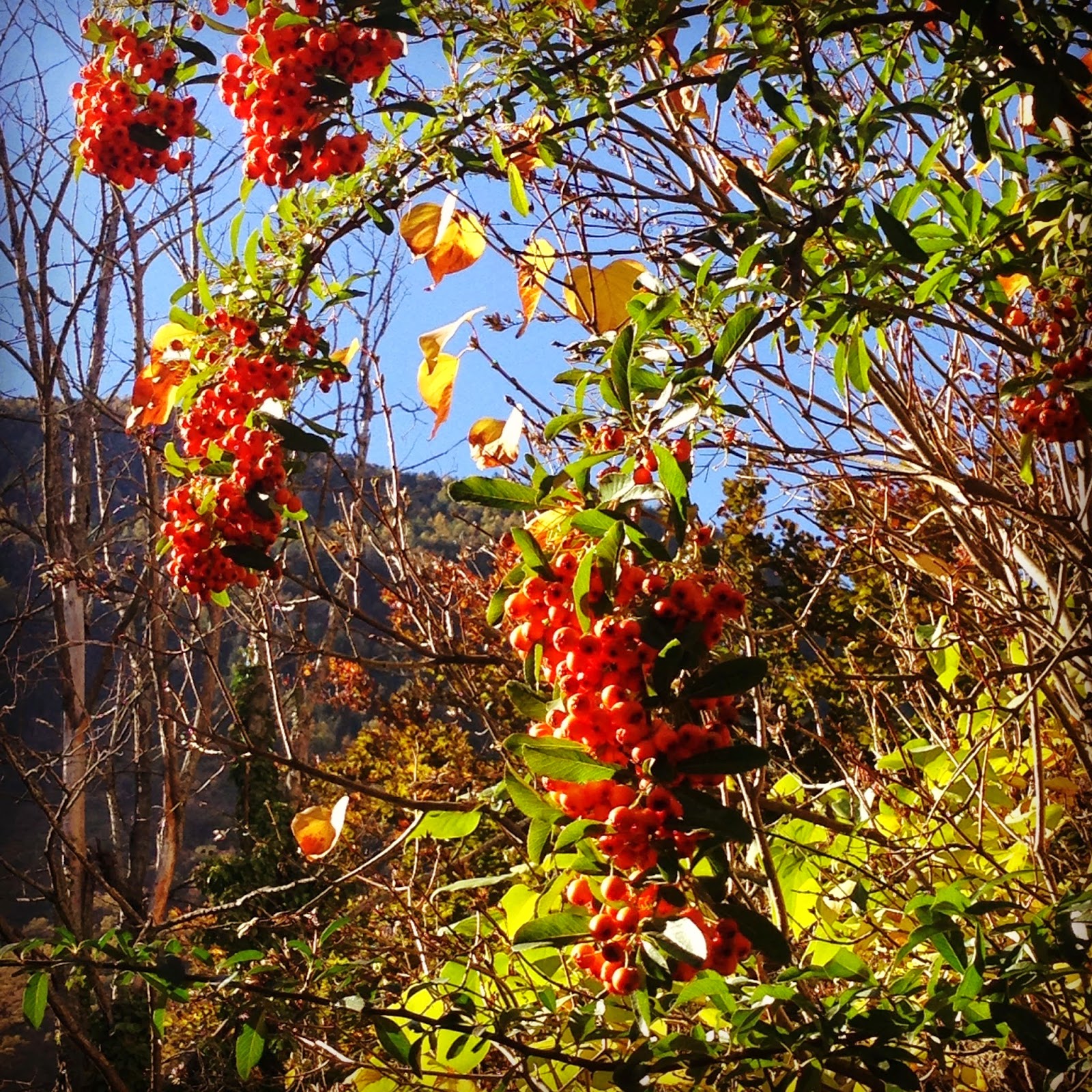 I met Dr. José Vouillamoz at lunch...in the Republic of Georgia.  An international gathering of wine professionals sat in the autumn sunshine eating roasted meats and drinking Rkatsiteli fermented in qvevri.  When I turned to make conversation with my table mate, he modestly revealed he was working on a book with the tremendous ambition of cataloguing the world’s grapes under production.  “Wow!” was all I could muster.
Three years later, I got to know José much better at the Digital Wine Communications Conference in Montreux, Switzerland.  There I learned that Swiss wines are not just of academic interest to José – they are a personal passion and a birthright, as he was born in the rugged mountains we would soon explore.
Our first stop was an exceptional mountain vineyard.  Our bus couldn’t descend the terraced slopes, so we walked.  There is nothing like walking through the Swiss Alps.  The air has an almost heartbreaking sweetness.  Your spirits raise as you advance on soft dirt paths lined by lush green grass where small cows graze, their bells ringing “bom bom” as they walk.
Afterwards, we hiked back up and hit the road again to visit Clos de Tsampéhro. Their Extra Brut was a refreshing sparkling wine blended from Petite Arvine, Pinot Noir, and Chardonnay.  When we moved to the still wines, we sampled wines made from varieties most of us had never tried, including the red grape Cornalin (more properly called Rouge du Pays per José’s studies) and Rèze.   Cornalin is considered the “local lord” and Rèze used to cover the valley in the pre-phylloxera days.
The day concluded with a memorable visit to the Sensorama at Chateau de Villa in the village of Sierre for a truly exceptional tasting: Impossible Valais, in which José shared treasures from his personal wine collection.   All joking ceased as we took our seats in a beautiful, modern tasting space: we were humbled and honored at the wine we were about to taste.
Among the ten wines he poured for us, these stood out most to me:
Orsat Arvine Primus Classicus 1988 – This white had apricots and ripe peach flavors with even some racy grapefruit notes. It was silky and had a gorgeous richness, but, somewhat paradoxically, also a refreshing acidity.
Provins Amigne 1967 – This funky wine had mushroom and scones on the nose and high acidity still. José told us this grape was first mentioned in 1686 and this rare variety is only planted on 42 hectares in the entire world.
Orsat Johannisberg St-Théodule 1955 – This white made from the Silvaner grape had a fresh, inviting nose, with scones and currents. On the palate, I found yellow raisins, quince paste, marmalade, lemon cream, and pumpkin. José told us that 1955 was the vintage of the century for Valais.
It was at that point, we began to question, only half-jokingly to ourselves – were we even worthy of these wines?
Stéfano Délitroz Rouge du Pays 2011 – fast forward to the present, we had a beautiful red.  There was smoky bacon on the nose and palate, and deep blackberry flavors.  The acidity, fruit, and alcohol were in balance.  I loved this deeply concentrated wine, which was like a meal in a glass.  We learned that this wine came from 80 year old vines, a special parcel owned by two people who knew how great these vines were – José and Stéfano Délitroz.
Bourgeoisie de Grimentz Vin du Glacier 1886 Solera – This wine was made from Rèze.  If the tasting had not already earned its name, “impossible,” it certainly did with this wine.  The wine had been topped up over the years, with the base wine dating back to 1886.  It is from the village of Grimentz, and it is only ever available by making the journey to the wine cellar. José had to convince them to let our group try the wine.  They agreed on the condition that we would tell the story.  There are only 20 liters of this wine in the barrel known as Tonneau de l’Eveque or the Bishop’s Tonneau (large format barrel).   The wine was deep in color and had a sherry-like flavor with almonds and hazelnuts. Savory, with a finish that seemed to never stop, we all agreed we had never tasted anything quite like it.
There were many times for laughing on the trip and there were times when the normally ebullient José would say, “Now, we are serious.”  Tasting this wine was not just serious, it was a reverent moment that would never be repeated-- all of us in Switzerland, tasting these amazing wines together.
In the days that followed, José led our group to more wonderful wineries, including:
Amedee Mathier
Chanton winery
Domaine des Muses
Domaine Rouvinez
Simon Maye & Fils
Cave la Liaudisaz
We also were treated to an unforgettable authentic Swiss alpine meal at Restaurant Chateau de Villa, the “Temple of Raclette” where we indulged in plate after plate of melted cheeses accompanied by smoked meats, small potatoes, pickles, and breads.


As we traveled with José across breathtaking mountain passes, his smile and generosity never failed him, all while teaching us so much about the heritage and history of these grapes (making me eager to add his Wine Grapes book to my personal collection, as I understood first hand his brilliant grasp of the subject.)  To sip wine, eat Raclette, and meet winemakers with him was an experience I will always treasure. José’s favorite expression as he led us through mountain vineyards and village wine cellars was “We are young, we are beautiful and we love each other.”  José’s knowledge of grapes’ heritage vastly enriched our understanding of Swiss wines - and his friendship vastly enriched our lives.
Posted by Diane Letulle at 2:35 PM