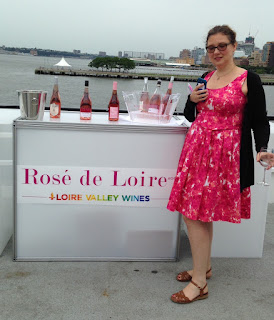 
So, who comes out for a full-rose event?  There was an elegant crowd, many of whom got into the spirit by dressing in every shade of pink imaginable.   The event received major sponsorship from Wine Enthusiast, and copies of their latest issue were available to attendees.
Posted by Diane Letulle at 11:04 AM