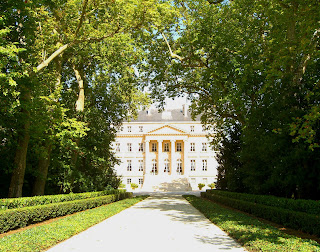 As a traveler who normally shies away from group tours, I’m happy to report that this weekend was a resounding success:
Day One—We assemble for a morning lesson & tasting at the Bordeaux Wine School taught by the cheerful and articulate Jane Anson, a writer for Decanter. Our small group includes a writer and photographer from the U.K.’s Daily Telegraph , adding to the glamour of the trip.
We spend the day in the vineyards of Sauternes, learning about the noble rot that turns plump grapes into shriveled gems of sweetness. After a hearty three course lunch in a charming village restaurant, we tour another vineyard. Then we head home to briefly rest before an alfresco dinner in the stone-paved courtyard of Bordeaux’s elegant Museum of Decorative Arts. There we enjoy a little bites of cheese, meat, seafood, and dessert, all paired expertly with Bordeaux wines. The weather is fine, the food and wine are heaven, and the company is delightful.
Day Two—We rise early to ride through the mists of the Medoc while being entertained by our driver, Henri, a former sommelier to the French prime minister. We meet Marie Lurton, a member of the world-famous Lurton wine family, who challenges us to: Guess the Bordeaux Blend! I wrongly estimate that there is more Cab in a 2006 that turned out to be dominated by Merlot. It’s fun, educational, and alcoholic—what more could you ask of a game?
En route to the next stop, we have our first sighting of the harvest. The air is festive and the pickers include dreadlocked youths pitching grape bunches good-naturedly at each other. Then it’s on to Chateau Paloumey, where winemaker and owner Martine Cazeneuve takes us into the vines to show us how to read the sugar content of grapes with a refractometer.
We lunch at her beautiful, art-filled chateau (the building is more modern California than old world, but is called a chateau nonetheless). The scene: a high-ceiling room with stark white walls, unique china, custom printed menus that detail all the wines we drink, conversations in French, English, and a lot of franglais.
Full of blanquet de veau plus multiple glasses of rose, red, and white wine, we head back to the city of Bordeaux, sated and happy. So, cheers to the Lucien Gabillaud and Cornelia Blume of Vitivinitour for a wonderful weekend.
Posted by Diane Letulle at 8:23 AM 1 comment:

Bordeaux encompasses a vast area in southwest France. The wide Garonne river separates this region into a right bank, where the wines tend to be dominated by Merlot, and a left bank, where they’re heavy on the Cabernet Sauvignon. A world-class destination for any wine lover, Chateau Mouton Rothschild is located in Pauillac, a left bank town.
The Chateau welcomes visitors with tours in both French and English. I was thrilled to get a last minute spot on an English tour, but I’d recommend reserving a spot at least a month in advance, especially in the summer.
The Chateau is tucked away from the main road, and I overshot it before spying the discreet sign, and following the directions for “visites”. About a dozen Yanks & Brits congregated in the modern lobby before being ushered into a small theater. We watched a short film detailing the history of Mouton and the family’s wine empire, which includes holdings in California and South America. The film was narrated by none other than the Baroness, who runs the whole show. We spied her elegant home on the property and got a peek at her two private wine cellars, where she has more than 200,000 bottles at her disposal. Oh, to be a guest at her parties!
Bordeaux has been making wine for centuries, and, many would say the world’s best wines are made here. To understand the significance of these chateau, you need a little history. In the world’s fair of 1855, Napoleon called upon wine makers of France to classify their wines according to quality so he could present his nation’s finest offerings. The winemakers of Burgundy and Champagne declined, unable to agree upon a ranking. But in Bordeaux, the winemakers classified their wines purely according to price. The result is the historic classification of 1855, a ranking of the top 57 wines, broken into five categories, from “first growth” (the best) to “fifth growth” (still pretty darned good). The ranking stood firm until 1973, when then minister of culture Jacques Chirac agreed to elevate Chateau Mouton Rothschild from a second to a first growth.
In addition to this distinction, Mouton Rothschild is known for its beautiful labels. Each year an artist is invited to create the label for the wine. Picasso is among the famous painters who have left their mark on the bottle.
Our charming guide Audrey Castelmerac, led us on the tour through the cellars, the impressive art museum (a gift from the Baron to his wife for her birthday!), and outside among sample vineyards. Then we happily followed her into the tasting room.
What is it like to taste a wine that will be great in 20 years? It’s like meeting a stranger and knowing you can be happy together for decades. Who can see the future of a young wine and divine the greatness within? Well, that’s what the Robert Parkers of the world can do….As for me, as I tasted the 2006 Mouton Rothschild, I enjoyed its rich fruit, its full aroma. But, could I tell by my tastebuds that we were enjoying a wine that would sell for 430 euros? Sadly, no. I’d love to come back in 20 years and taste the ‘06 again, enjoying all the complexity, the lovely layering of flavors that would have developed.
Posted by Diane Letulle at 8:12 PM 2 comments: