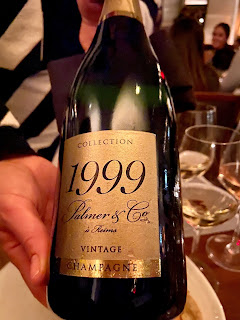 Chateau Palmer, a very English-sounding Champagne house, was in fact founded in 1947 by seven French grape growers. The owners had set their sights on the British market and chose what they considered to be a classy English name for their venture: "Palmer." Today the house is esteemed for the consistency and elegance of its cuvees. More than 50 percent of vineyards used by the Chateau are designated as Grand and Premier Cru vineyards located in the Montagne de Reims area which lies between the Marne and Vesle rivers.

Today the house is dedicated to sustainability and has committed to providing sustainable protection of the vineyards for the sake of the wine, the grape growers and winemakers, the environment, and its customers.

At a media dinner at Scarpetta, Raymond Ringeval, Export Director of Champagne Palmer & Co., led a small group through a tasting of some current releases as well as some rarer bottles.

We began with the Brut Reserve NV which, according to Raymond, always has at least 50% Chardonnay. He told us that it is rare to have this much Chardonnay in this kind of blend, but that this "queen of grapes" is one of the signatures of Chateau Palmer, as they source from two of the Grand Cru villages where Chardonnay thrives. The Brut Reserve was crisp with fresh citrus notes as well as toasty brioche. It is aged four years on lees before bottling.

Next we sampled the award-winning Blanc de Blanc made from 100% Chardonnay sourced from Premier Cru vineyards in the Montagne de Reims as well as from the Cote De Sezanne. Raymond explained that this was one of their most renowned Champagnes. Of special note is the aging these wines see; magnum bottles of the Blanc de Blanc spend 10 years on lees. The 750 ml bottle had 6 years on lees and had notes of crisp lemon, toast, and hazlenuts.

These non-vintage Champagnes spend more time on lees than many, contributing to their complexity and roundness. In addition to the grapes and winemaking techniques, aging is another important factor in what makes these Champagnes special. According to Raymond, "We're cultivating time."

The Rose Solera NV Champagne has 42% Chardonnay, 40% Pinot Noir, 10% Pinot Meunier, and there is the addition of 8% of Solera of Pinot Noir.  The solera was begun 40 years ago, and every year new wine is added to it. This unexpected addition is the source of extra richness and complexity. Of all the Rose Champagne I've had, none have made such an impression on me. There is a power to this wine, along with finesse. On the palate, straweberries, baking spice, and cream.

The Vintage 2012 Champagne was very aromatic with notes of ripe pear and marzipan. On the palate there was great complexity and layers of marzipan, pear, and toasted almonds. The wine also had minerality and bright acidity. Raymond explained that the house only creates a vintage wine every 5-6 years. 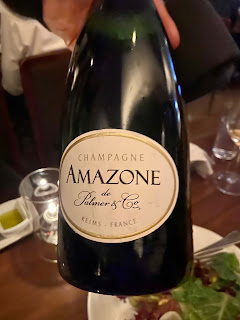 The next wine was a special cuvee known as Amazone. The name hearkens to the mythical race of women warriors and reflects the strength and elegance in the wine. The current release of Amazone is a blend of three top vintages - in this case 2012, 2009 and 2010 - as well as a solera Chardonnay. It spent 8 years on lees. The wine was dense with flavors of apple compote, baking spice, and marzipan. A delicious and unique cuvee.

We ended the evening with the Vintage 1999 Chauteau Palmer Champagne. Raymond told us that vintage Champagne is part of the Palmer DNA.  This wine had aromas of dried fruits and toffee, which continued on the palate, along with minerality and a freshness that belied the wine's 23 years.

Among the world of Champagne, Chateau Palmer is making wines that are distinct due to their high concentration of excellent Chardonnay in the cuvees as well for their penchant for long aging. I was impressed by the line, which had excellent choices for many moods and occasions - from parties to noteworthy anniversaries.

Posted by Diane Letulle at 7:15 PM