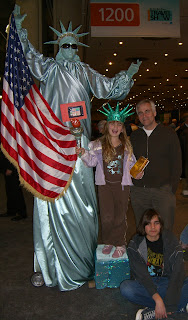 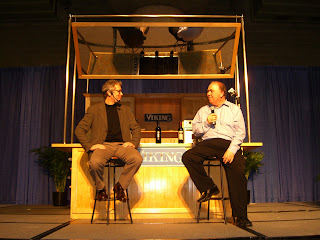 Next I strolled through the cavernous exhibit hall to the cooking demo area, where Eric Asimov spoke about traveling to lesser known wine regions. Joining him on stage was Doug Duda, host of A&E's The Well-Seasoned Traveler and executive director of the recently-opened Astor Center, a gorgeous-looking facility with classes in the culinary arts, wine tasting, even wine smelling! Definitely something I need to check out.
Eric was impecably dressed: from his houndstooth jacket to his mod black turtleneck he looked every inch the sophisticated wine journalist. Yet his presentation was anything but austere. He grinned his way through describing the up-and-coming wine region of Slovenia. We all sipped a buttery wine from the Ribolla Gialla grape, another great showing from the Fruili region I so recently became exposed to from Wine Blogging Wednesday. We also tried a bracing white wine from Santorini, Greece, and, as Eric put it, an "agile" red wine from Austria made from the unusual zwiegelt grape. After the talk I was able to chat with Eric and tell him about my little old blog. Unbelievable. Another reason I am so grateful to live a stone's throw away from one of the greatest cities on earth.
So cheers to NYC and the NY Times Travel Show. I can't wait to go for two days next year.
Posted by Diane Letulle at 9:43 PM