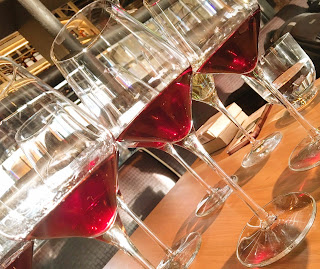 The history of Sanford Winery is in the soil, as some of the first vineyards in the cool climate Santa Rita Hills AVA were planted at the pioneering Sanford and Benedict winery in 1971. There the winery's Pinot Noir soon began to gain attention. The operation later added an adjacent vineyard, La Rinconada in 1997.

I met one of the original founders of the winery, Michael Benedict, and one of the partners in the business, John Terlato, in New York this summer.  The pair guided a group of media through a vertical tasting of their award-winning Pinot Noirs, as well as two of their Chardonnays.

Before the tasting began, John Terlato filled me in on the history of this special area, telling me that California had been covered by an ancient ocean that left calcareous shale in the land that would become the vineyard. John noted that the geological history of this vineyard was similar to Burgundy, which also was once covered by an ancient sea and still has fossilized sea life in the soil.

John told me that when his family first became involved with this winery, their focus was on improvements in the vineyard, changing the canopies, the pruning techniques, and the grapes.  One of the exciting aspects of the vineyards is that there are some 47 year old vines on their own roots - a rarity in the world of wine.

Today the winery is pioneering once again in the winemaking process: around 2017-2018 they stopped using commercial yeast in favor of all native yeast.  John showed me detailed notebooks of other experiments, including a comparison of wines that had low intervention and those that used "battonage" - meaning the wine was stirred in an effort to develop more flavors by encouraging more contact with the "lees," essentially dead yeast left after fermentation.  John found the wine in the trials that were not stirred were "mineral" and "precise." 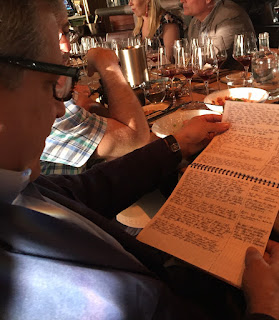 After enjoying learning some history of the vineyard and winery, we moved on to an extensive flight of excellent Sanford wines that showed the progression in winemaking philosophy over the years. 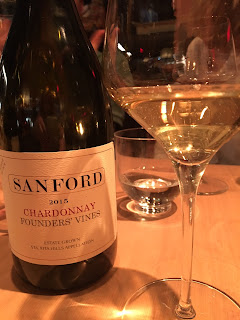 2012 Sanford & Benedict Pinot Noir - Brighter tart cherry notes with balsamic on the finish, it opened and became more fragrant as it evolved in the glass.

2013 Sanford & Benedict Pinot Noir - Bing cherries and wild blueberries dusted with clove. There was well integrated oak in this wine. $140

2014 Sanford & Benedict Pinot Noir - Ripe cherries and raspberry puree with savory notes on the midpalate and a touch of leather on the nose.  $70

2015 Sanford & Benedict Pinot Noir - Tart cherry throughout with an angularity and fine tannins.  $70

2015 La Rinconada Pinot Noir - Bright fruit character with cherry/raspberry notes, and a touch of cola on the midpalate.  $72

This impressive vertical tasting showed the evolution of this winery and its philosophy. The earlier vintages showed the gorgeous ripe fruit that this pioneering vineyard area is capable of, but the later vintages begin to show a more direct representation of Pinot Noir character.  This re-energized spirit of pioneering is serving Sanford winery well.