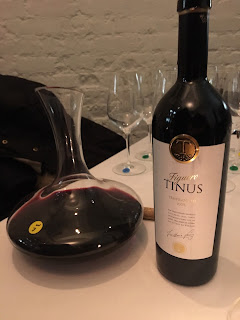 When I met Tinto Figuero's chief winemaker Jean Francois Hebrand at a media dinner at Il Molino in New York recently, I had lots of questions about how a French winemaker fell in love with Tempranillo. Luckily, he was gracious and forthcoming about how he came to be making wine in Spain and conquering the challenges of Spain's most famous grape.

Jean Francois, who was born in France's Bordeaux region and raised by a wine-making family, previously made wine in top Bordeaux chateaux as well as consulting in other parts of France and Switzerland. He moved to Spain and began making wine in 2001 and became chief winemaker at Tinto Figuero in DO Ribera del Duero in 2010. Here he makes elegant Ribera del Duero wines from 100 percent Tempranillo. 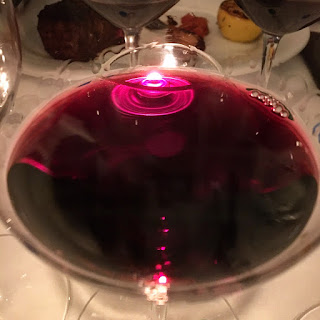 As for the Tempranillo grape, Jean Francois characterizes it as "very generous." He explained that even though the grape skin is the same color as Pinot Noir, it produces a much more deeply colored wine. He added "Give it good conditions and it produces." The vineyard regions where Tinto Figuero's Tempranillo grows are calcacerous gravel, sandy, and clay. The influence of the Duero river is felt, as the river cuts through their property. Tinto Figuero uses organic farming techniques and relies on sponateous fermentation from natural yeast.

For "personality and expression" Jean Francois says that "organic is best." He sources the wines from 80 different plots including 30 hectares of very old vines with 50 years plus age.
The Rioja and Ribera del Duero regions are recognized denoting aging as signs of quality. For a number of its wines, Tinto Figuero simply states the months of aging on the label, providing guidance for consumers in a straightforward manner. Here are some notes on the recent vintages we sampled: 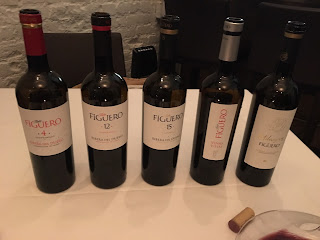 Tinto Figuero 4 (Roble) 2016 - Four months in barrel is an indication that this wine is meant to be an easy-drinking, approachable wine - and it is. Bright fruit flavor of cherries shines through, and the wine has a nice acidic lift. American oak is used to give the wine round tannins.

Crianza 12 2016 - Moving up in aging to twelve months, this wine provides a more structured approach to Tempranillo with deeper layers of flavor including red and black fruit. French oak is used on this wine to provide fresh tannins that Jean Francois says are good for aging.

Tinto Figuero Vinas Viejas 2015 - Jean Francois says this wine is a "brother" to the 15. It has a more herbal nose, and the addition of minerality to the deep flavors and black and red fruit. The wine had huge length and ample acidity to sustain the richness.
Milagros de Figuero 2014 - Named for a matriarch of the family, Milagros has a richly aromatic nose of violets and red currents. The grapes used are from bush vines with more than 60 years of age. They produced a wine very pronounced blackberry and dark cherry flavors with a hint of chocolate.

Figuero Noble 2014 - The nose was a melange of violets, herbs, and raspberry. On the palate, blackberry jam and sour cherries as well as a hint of eucalyptus and spice. This highly-structured wine had tannins that were present but well-integrated. The finish had great length.

Figuero Tinus 2012 - A rare wine from a single, family owned vineyard of 70+ year old vines. The nose promised black fruits and eucalyptus which carried through on the palate. There were complex layers of flavor including black plums, pomegranate, and baking spices including cloves. The huge finish lingers. I found this a wine of great complexity. This is an achievement of winemaking that indicates the beauty and age-worthy quality that these Ribera del Duero Tempranillos can achieve.

This tasting of Tinto Figuero with Jean Francois Hebrand revealed a well-composed portfolio of quality wines at a range of price points to satisfy consumers seeking expressive Tempranillo from the famous Ribera del Duero region.
Posted by Diane Letulle at 10:55 AM