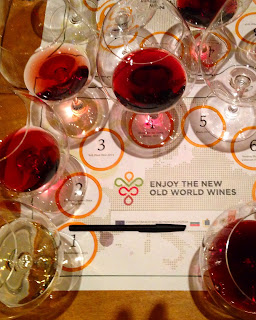 It's not the first country Americans think of when it comes to wine, but Bulgaria actually has thousands of years of wine-making history. In fact, the cult of Dionysus originated here - Bulgaria takes its grapes seriously!

Yet this country, located northeast of Greece, is not stuck in ancient times, There's a new spirit of innovation that's leading to modern wines created for today's palate.

At a seminar presented by the World Wine Guys Mike DiSimone and Jeff Jenssen, an audience of beverage media and trade tasted a range of wines made from both international varieties and indigenous Bulgarian grapes. There were some terrific surprises in the lineup.

My favorite wines of the tasting included:

- Version Plaisir Di Vin  2013 Cabernet Franc - delicious, fresh, black pepper and dark fruit, this wine won a silver medal at the Concours Mondial de Bruxelles.
-F2F Chardonnay 2015 - notes of lime and minerality and delightfully crisp.
-Pixels Cabernet Sauvignon 2014 - Blackberries, blueberries, high acid, this Cabernet is a far lighter rendition than Napa - and that's not such a bad thing.
-Version Plaisir Di Vin 2013 Mavrud - Here is Bulgaria's hearty indigenous grape, offering savory quality of smoked meats but also nice pomegranate fruit.
-Edoardo Miroglio Bio Mavrud and Rubin - This organic wine combines two indigenous grapes. The nose says "Bulgaria" but it's a more approachable rendition than when, in old times, it was said you could carry the wine in your handkerchief it was so dense. This blend had strong flavors of blackberry with black pepper. I compare it to the weight and spice of a good Carmenere.

Clocking in under $20, these Bulgarian wines will expand your vinous world at an affordable price.

Posted by Diane Letulle at 9:00 AM