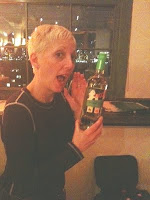 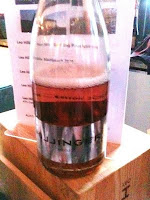 Last night at Austria Uncorked, a massive trade/consumer tasting at the sprawling event space TriBeCa rooftop, I noticed something funny on some of the wine labels – words that were not German.

For example, Hillinger poured a Pinot Noir-based sparkler that was full of ripe raspberry flavors, but it was not called by the German word Sekt, as I knew it normally would. Instead, it was referred to as “Secco.” When I asked why, I was told because people would think of Prosecco. It was an interesting choice, especially because wine aficionados also think of “sec” (the word for "dry" in French) as being a level of sweetness, a la Champagne. It was also at the Hillinger table where I encountered the word “Terroir” on the label – it was the name given to one of their high-end wines. That word's thrown around a lot, but here it just seems confusing, as the label tells you nothing about what the "terroir" is actually like--it's merely used as a buzz word.

I wonder if this language tinkering is necessary, because I think Hillinger has already tackled the "German" question with their innovative silver labeling and stylistic logo, and, most importantly their wines are really good. I understand that the German language is no picnic for the English speaking world, and that wine lovers in the international market are more likely to know about the popular Prosecco than Sekt. However, as a lover of language, I'm a little let down when I see this.

One brand that seems to successfully be jumping the German hurdle is Monica Caha wines, which have a great graphic representation of Austria's signature grape, Gruner Veltliner. I met Toni Silver, a New York-based representative for the brand and the model for the shouting "Grooner" girl, who appears on their wine labels and Twitter avatar. I like the way this company has taken the hard to pronounce Gruner Veltliner and shortened it in a fun way. At least we're still in the same language.

Another Austrian brand uses the "animal on the label" to cross the language barrier -Zantho. I also like this decision, because, not only is their lizard rendered in an artistic--not cutesy--way, but also because I know that this type of animal is unique to this part of Austria and therefore representative of the (there's that word again) terroir.

As someone who loves history and language, I appreciate traditional Austrian labels, such as are found on one of my favorite wine brands: Umathum. Their labels conjure up the romance of Europe and the tradition of the old world.

Still, I acknowledge that for the most part, it is a tough challenge to get Americans and the rest of the non-German speaking world to get beyond this complicated language to appreciate these wines. However, it's definitely a worthy goal, as Austrian wines have something very special to offer wine lovers.