If a Vodka Tonic Were a Wine… 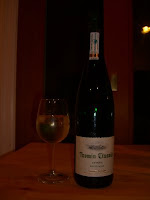 Summer’s not done yet, as evidenced by a weekend of hell-like humidity hovering around 72% and heat around 90 degrees here in NJ. The furnace blast upon leaving our air-cooled home wilted our clan as we cheered son Dylan’s first outing in the WOHS Marching Band during an afternoon home game (West Orange creamed Bayonne 47-6).
Stopping by Home Liquors later, I blew some of my NJ Homestead Rebate check on an assortment of wines.
I picked up a Spanish white that was not only unfamiliar, but also unpronounceable: Txomin Etxaniz Getaria 2007. Reading up on it online, I discovered that it’s similar to Portugal’s Vinho Verde. It comes from a tiny region in northeast Spain, close to San Sebastian in Basque country.
I chilled it well and served it over ice, just to add to the refreshment. I was tickled to see that it has a little spritz and bubbled slightly as I poured. It even looked refreshing: near-transparent with the faintest hint of yellow. It has a fresh, crisp scent and the flavor really wakes up your mouth—zesty, full-on lime. This wine is a wonderful, cooling palate pleaser on a sticky night. Its alcohol is on the low side, at 11 %.
I’m not much for mixed drinks anymore, but it’s hard to argue with the hot weather appeal of a nice vodka tonic. Now I have a wine that refreshes equally well, with a mouth puckering lime flavor to boot.
Posted by Diane Letulle at 9:16 PM